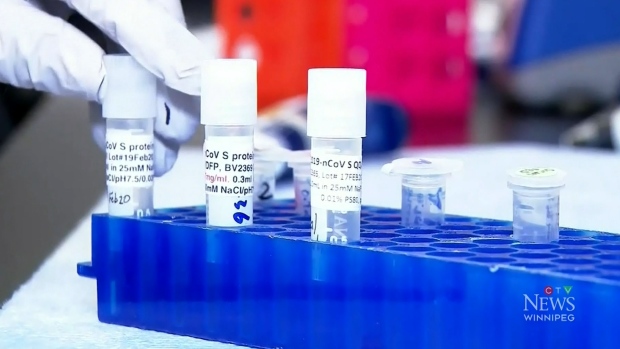 WINNIPEG — The University of Manitoba is leading an international clinical test to see if a blood-thinning drug can improve the survival of COVID-19 patients.

The large-scale clinical trial testing the blood thinner heparin is launching around the world this week, led by a team of clinician-scientists from the U of M and the University Health Network.

Dr. Ryan Zarychanski, co-principal investigator of the clinical trial and a hematologist and critical care physician at the U of M and CancerCare Manitoba, told CTV News there has been a high incidence of thrombosis, or blood clots, associated with COVID-19 infections around the world.

He said this is causing death by pulmonary embolism (blood clots in the lungs) or strokes. He said when people die of COVID-19 it is due to overwhelming inflammation and respiratory failure.

“Some of that respiratory failure is due to small blood vessel thrombosis – small clots in different organs including the lungs – where you can’t get enough oxygen into the body because some of the blood vessels that come out of the lungs are clotted off,” he said, adding inflammation in the lungs also prevents them from working as they should.

Heparin is a blood thinner with anti-inflammatory properties that could treat the inflammation and clotting, but Zarychanski said another discovery about heparin has brought the drug into the spotlight.

“Early in the course of the pandemic, it was shown that heparin actually interferes with the virus’s ability to bind to surfaces in the body, and so heparin may have a specific anti-viral effect,’ he said.

Heparin is also accessible and inexpensive. Zarychanski, who has been studying heparin for the past eight years, said it can cost less than $20 a day for people who need to be treated, though prices range depending on the brand.

“On the grand scheme of drugs used in medicine, this would definitely be inexpensive – and that’s kind of the appeal a little bit,” he said. “If we can repurpose heparin to reduce blood clots and treat inflammation, and to treat a specific viral component to COVID-19, than this is something that could be adopted in any country around the world very quickly.”

The clinical trial is set to run at 35 sites in Canada, the US, Mexico, and Brazil, including three sites in Winnipeg at the Health Sciences Centre, and the St. Boniface and Grace hospitals. The university said more countries are preparing to participate.

The clinical trial is planning to enroll 3,000 COVID-19 patients who have been admitted to the hospital. During a second trial, the U of M said researchers will look at the impact heparin has on patients in the intensive care unit who require life support.

“Manitoba rarely leads trials on this international scale, and so it’s exciting to be a part of that leadership group,” Zarychanski said. “It’s a very high-priority trial in the sense that people around the world are asking for this specific trial to be done.”

The trial is called ‘The Antithrombotic Therapy to Ameliorate Complications of COVID-19 (ATTACC).’ Zarychanski said the team hopes to complete the trial within six months.

Zarychanski is leading the clinical trial with Dr. Ewan Goligher and Dr. Patrick Lawler from the University of Toronto.