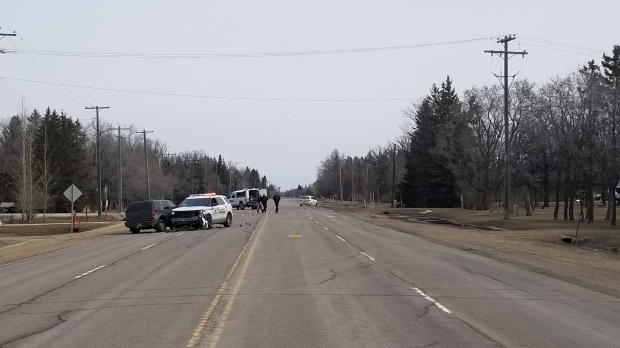 WINNIPEG — Manitoba RCMP said they shot at and collided with a vehicle while trying to stop a pair of suspects on Friday morning.

Just after 2 a.m., RCMP in the Selkirk, Man., detachment saw a “suspicious” vehicle in the area of Highway 9 and Grassmere Road.

Police said they tried to do a traffic stop by Nelter Drive and Lara Lane, but when they were trying to stop the suspects, a crash occurred, and an officer fired their gun. The suspect vehicle drove away, and police chased after.

During the chase, the police cruiser struck and disabled the suspect’s car on Highway 9, close to the scene. Police note two male suspects then ran away.

The RCMP’s police dog services came to search for the suspects. One person has been arrested, and police continue to look for the second suspect.

The major crime, forensic identification and traffic services units are investigating. No officers were hurt during the incident.