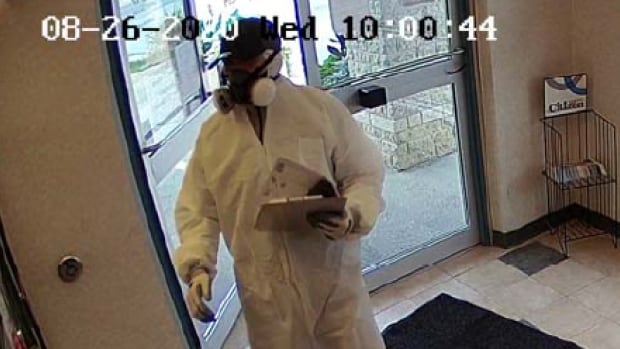 Police in Landmark, Man., say they aren’t looking for Walter White but they are seeking a man who robbed a bank dressed like the meth-cooking TV science teacher.

RCMP have shared security camera images of a man who robbed a bank in the small community about 30 kilometres southeast of Winnipeg.

Police say the man entered the bank about 10 a.m. on Wednesday with a note on a whiteboard demanding cash.

The man was wearing a white suit, respirator-style mask, gloves and a dark baseball cap.

The man walked out of the bank two minutes later with an undisclosed amount of money.

Anyone with information is asked to contact the St. Pierre-Jolys RCMP.