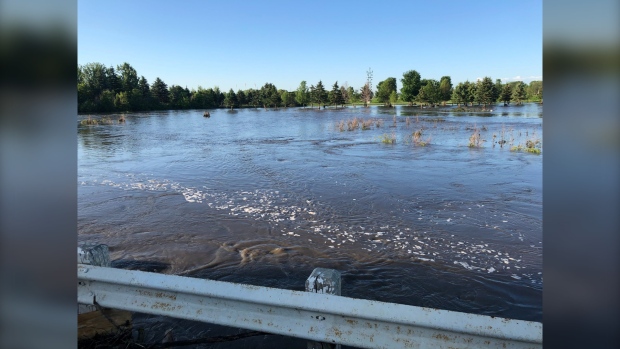 WINNIPEG — The Manitoba government announced it will be providing tens of millions in disaster financial assistance (DFA) to help with costs related to three flooding events earlier in the year.

Infrastructure Minister Ron Schuler made the announcement at a news conference on Friday, Sept. 11, noting the funding will focus on three events that happened in the spring and summer of 2020.

The province will be providing a $3.7 million DFA program for a high-water event that took place in the spring when both the Red River Floodway and Portage Diversion were activated.

The minister said this DFA will comply with federal matching funds.

“As all of us know, we decided to live at the bottom of what used to be a lake and enormous watershed, about the size of a European country, that drains through all kinds of tributaries,” Schuler said.

The second event took place from June 6 to 10, when southeast Manitoba was hit by heavy rains, with some areas receiving 200 millimetres in the span of three days.

Due to this storm, overland flooding was reported in the rural municipalities of De Salaberry, Piney, Reynolds, La Broquerie, and Stuartburn, as well as the municipality of Emerson-Franklin.

Schuler said the damage is $2.059 million for the event, and there will be no federal matching funds.

“There was no way any system could have handled the kind of moisture that came down,” the minister said.

“In fact we toured down a road, passed the Rat River, which was about 500 metres wide, it just turned into overland flooding and flooded everything and anything in its way.”

The third flooding event took place between June 28 and July 5 in western and southern Manitoba around the Brandon, Rivers, and Neepawa areas.

During this storm, the rain-swollen Little Saskatchewan River made its way to the Assiniboine River, which impacted Minnedosa, Rapid City, and Rivers.

The province noted this was a one-in-1,000-year event that caused it to lose confidence in the dam near Rivers.

Due to this storm, some properties had to be evacuated and the Portage Diversion was activated.

There was also heavy rain in the upstream watershed of the Whitemud River, which caused water levels to rise and exceed 2011 levels.

The minister said the province is declaring a DFA of $29.44 million for this flooding event.

“It was rain of epic proportions,” Schuler said, adding there was no way anything could have handled this amount of rain.

The province noted the DFA application deadline is Dec. 10.