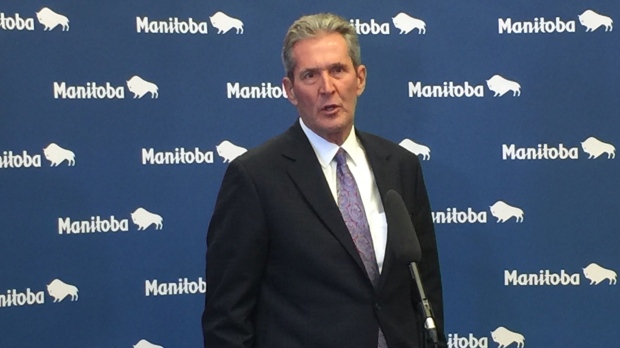 WINNIPEG — The Manitoba Legislature is back in session and it got off to a tense start, as Premier Brian Pallister defended cuts to the public sector during the COVID-19 pandemic.

“We have a bunch of offices closed. Tons of administration that doesn’t need to be done,” said Pallister. “We aren’t interested in layoffs, but we’re also interested in fairness.”

The proposed job losses dominated question period, as MLAs returned to the legislature. Starting Wednesday, they will sit once a week for question period.

Opposition leader Wab Kinew and the premier spared over possible job losses to the public sector, after the province announced $860 million dollars in spending cuts, as it faces a $5 billion deficit.

“How many specific positions will be cut?” asked Kinew. “Laying people off during a recession is the worst thing you can do, it will prolong the economic misery. Fewer people working means fewer dollars to spend at the businesses that are hoping to reopen and return to normal starting this week. It is a recipe for failure.”

Pallister said a small number of employees would be affected, but did not provide an exact figure.

“Less than three per cent, I repeat 97 per cent of workers won’t be impacted.”

Less than three per cent is far below what the province first proposed. It has asked public sector workers, including post-secondary institutions and Crown corporations to brace for 30 per cent reductions.

“I’m sorry your job is lost, but the work doesn’t need to be done right now,” said Pallister. “We look forward to having the economy resurge so you can get your jobs back. But I maintain that there are also in our province there are also a quarter of a million people outside government who have been impacted by the pandemic.”

“If you cut people’s jobs right now as the government, what’s going to happen to all those businesses that reopen this week? There are fewer customers with fewer dollars to go spend there.”

Liberal leader Dougald Lamont also accused the PCs of not being transparent and said the government’s COVID-19 response has fallen short.

“We really are dealing with an economic crisis that’s going to be devastating and we can either choose to protect people, or we can choose to leave them exposed.”