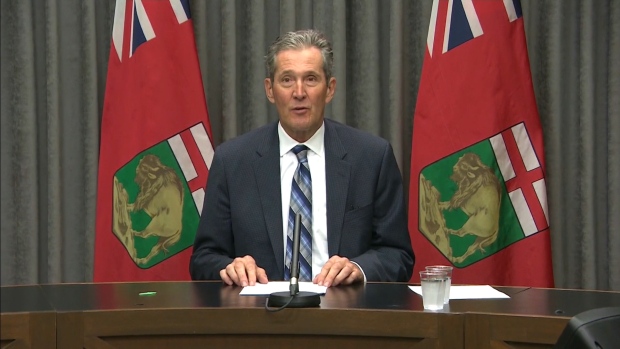 The premier made the announcement at a news conference at the Manitoba Legislative Building.

Pallister said he has embraced this initiative during calls with Prime Minister Justin Trudeau and Deputy Prime Minister Chrystia Freeland, and is pleased that the federal government has now responded.

“The prime minister said yesterday that they would be willing to dialogue with the premiers further on a sick-leave program,” he said.

The premier said this is necessary, despite the fact there is already a sick-leave program for frontline healthcare workers.

“The greatest risk many experts have said in other jurisdictions is people returning to work too soon, staying at work when they’re afraid to lose the paycheque when they have symptoms,” Pallister said, adding the federal government needs to lead in the coordination of the program.

The premier said he doesn’t want people, in the private or public sectors, returning to work and giving the virus a chance to return.

“A national paid sick leave program would ensure that people can stay home from work when they’re sick, without fear of not being able to make payments and pay their bills,” Pallister said.

The premier said this will also help with consumer confidence, knowing that when they go somewhere, they can be safe and protected.

“Safety is the key and avoiding a comeback is critical,” Pallister said, noting he will continue to work with the prime minister and other provinces and territories to move forward.

Pallister also said the national paid sick leave program would be for the duration of the COVID-19 pandemic.

The full speech can be found below.