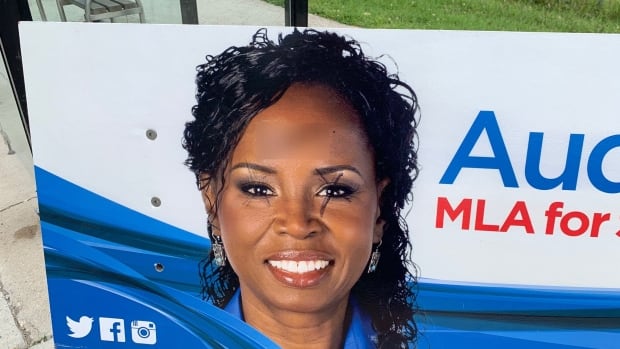 A Progressive Conservative member of the legislative assembly is denouncing an act of racism after a bus bench with her image in her riding was defaced with the N-word.

MLA Audrey Gordon (Southdale) said the racist slur that was scrawled across her forehead in the ad doesn’t represent the views of residents living near Cottonwood Road and Autumnwood Drive, where the bus bench is located.

“I am shocked and saddened by the senseless act of one individual who aimed to spread hate and division within our community,” Gordon said in a statement.

“Actions like this have no place in this country, this province and in this city. We value inclusiveness and diversity.”

Gordon was among a trio of the Black MLAs to be elected in Manitoba last fall — the first three in the province.

She said the graffiti was likely left by one person who demonstrated “overt prejudice, hostility and negative feelings about Black people.”

The racist act comes on the heels of protests in Winnipeg and across the continent in recent months after the death of George Floyd. Floyd died after a Minneapolis police officer pressed his knee into his neck for several minutes during an arrest.

His death set off a massive wave of demonstrations in North America and beyond and reignited calls for an end to racial injustices.

Gordon said it’s imperative communities stand in solidarity to denounce acts of racism such as those displayed in the bus bench.

A city spokesperson said crews plan to remove the graffiti as soon as possible.

“I am not deterred by this act. My resolve is strengthened to build a strong and united community where everyone is treated with equal dignity and respect and have equal opportunity to contribute to our society.”