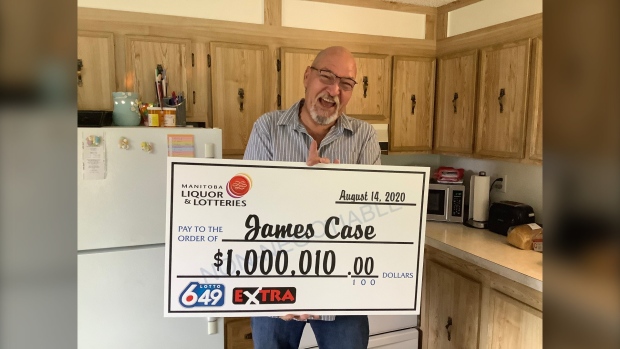 “I thought it was for $1,000 – but the girl who was working said ‘Sir, there’s too many zeroes for that,’” Case said in a news release from the Western Canada Lottery Corporation and Manitoba Liquor and Lotteries.

“So I had to scan it again…and I just thought ‘holy man, are you kidding me?!’”

He said he was shocked at first, but it’s starting to sink in.

“I’m in awe about this whole situation,” he said.

Case said he’s thinking about what he will do with the money, including travelling once it’s safe to do so, buying a new piece of property, and helping out his family.

“I want to make sure my kids are okay – they wouldn’t ever ask me anyway – and I want to help my sister out and a good friend of mine,” he said.

“I’d love to walk into their house and say ‘hey…guess what?’”

Case bought the winning ticket the day of the draw at a 7-Eleven on Saskatchewan Avenue West in Portage la Prairie. His ticket also got him another $10 prize, bringing his total winnings to $1,000,010.