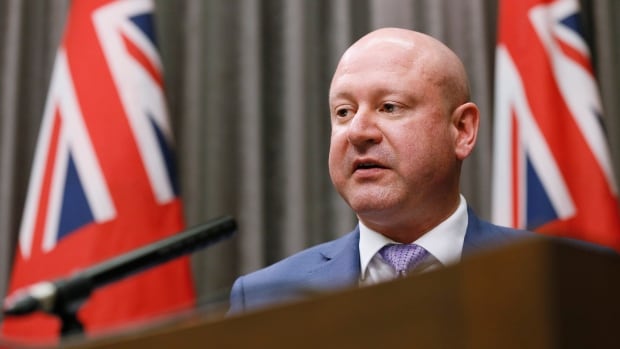 Another update on COVID-19 in Manitoba is set to be delivered by health officials at 11 a.m.

The province has been giving daily updates on the virus since the first case was detected in Manitoba on March 12.

On Friday, health officials announced the province had seen its first fatality from COVID-19: a Winnipeg woman in her 60s, who died after she was admitted to an intensive care unit in critical condition last week.

Three additional probable cases of the coronavirus had been identified as of 9:30 a.m. Friday, bringing the total number of lab-confirmed positive and probable cases in Manitoba to 39.

The province also announced Friday that it is ramping up measures to deal with the virus. That includes cracking down on public gatherings, which will be limited to 10 people as of Monday morning.

The province said it will also force retail businesses, including grocery stores, to make sure customers are at one to two metres apart at all times, bolstering what was previously only a recommendation.

Those measures come into effect on Monday.

Hours after announcing those measures, the province said it has also introduced five provincial border checkpoints, where travellers will be informed about the risk of COVID-19 and the need for self-isolation. The campaign will also include signs at the Winnipeg and Brandon airports.

Earlier Friday, the province announced it is launching an online counselling program for people dealing with anxiety related to the pandemic. The resource, which is expected to be available in two weeks, will pair people with a therapist for a 12-week cognitive behavioural therapy curriculum to help ease their symptoms.