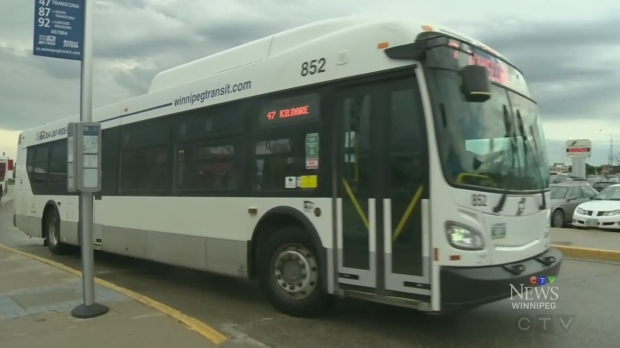 WINNIPEG — A campaign is rolling along to make it mandatory for bus riders in Winnipeg to wear masks, but an internal city email suggests it might not be as easy as it sounds.

On Tuesday, a petition calling on the city to mandate masks on Winnipeg Transit buses had reached close to 1,900 signatures.

“Winnipeg is the last major city of over 150,000 without a mandatory mask policy,” Fleisher told CTV News.

Winnipeg City Councillor Jeff Browaty said he would also like to see bus passengers be required to cover up.

“The reality is a lot of students in our cities – and in particular, Winnipeg ¬¬– use transit,” he said. “At the moment there is no mandatory requirement for masks on transit, to me it makes obvious sense.”

Internal email correspondence between Browaty and the office of the city CAO show city officials have explored how this could be done – through the authority given to the CAO or a council-endorsed bylaw.

“The Public Service continues to review the possibility of a more robust mask requirement policy as we look into purchasing, logistics and procedures,” the email, obtained by CTV News, reads.

But the email says, under the provincial response protocols, the CAO may not have the power to mandate masks and a bylaw could face a legal hurdle

“It is possible that a by-law made under the City’s by-law authority would be challenged, and the City will have to be prepared to defend itself in this case,” the email reads.

The email notes the city has generally deferred to the province for direction on COVID-19 matters.

Browaty said it would be easier if the province would simply issue a bus mask mandate.

“I know the province could issue a province-wide ultimatum right away in a public health order,” he said.

When asked on Monday about the chances of a mask requirement on transit, Dr. Brent Roussin, the chief provincial public health officer, said “none of these things have ever been off the table.”