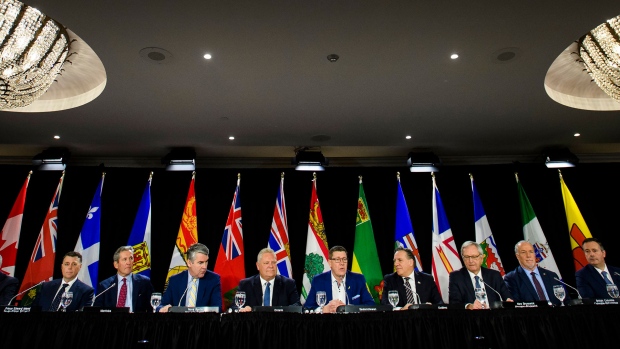 OTTAWA — The majority of provinces and territories say there is no need to invoke the Emergencies Act, and that it should be up to each government to dictate how they respond to the COVID-19 pandemic.

It was a question posed to premiers in a letter penned by Prime Minister Justin Trudeau on Wednesday, about whether there’s a need for further federal oversight to fight the virus.

A senior government source told CTV News that during a follow-up call with Trudeau on Thursday evening there was little debate about the pros and cons of applying the measure, but rather a collective agreement it is unnecessary at this time. The provinces and territories had held a group call prior where they flushed out their shared response.

The source said only a few provinces objected.

New Brunswick Premier Blain Higgs has been vocal about the need for a more uniformed, national approach to the COVID-19 pandemic in Canada.

“We are seeing new measures being put in place each day, and these measures can vary widely between provinces and territories. Enacting a national state of emergency is the best tool to ensure consistency across our country in the level of health care, safeguarding our supply chain, and mitigating the economic impact,” said Higgs in a press briefing on March 24.

The letter from Trudeau states: “The purpose of these consultations is to seek your views on the issuance of such a declaration and whether the COVID-19 situation exceeds the capacity or authority of a province or territory or of existing federal, provincial, or territorial laws to address it.”

The source said the majority of provinces and territories are pleased they can make independent decisions free from more severe federal supervision, especially given that health care is within provincial jurisdiction.

The letter states that on top of discussions like the one held Thursday, a formal written submission will be required by each province and territory by April 15 to indicate their standing on the Emergencies Act.