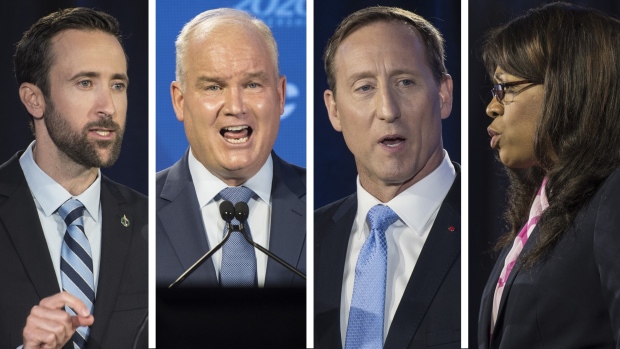 OTTAWA — Peter MacKay is leading after the first ballot in the Conservative leadership race while Derek Sloan has been eliminated and his points are now being reallocated.

Erin O’Toole finished in second place after the first round, and Leslyn Lewis is in third. None of the candidates have the majority so the results will go to at least a second ballot.

The announcement of the federal political party’s new leader is now underway, after hours of delays due to thousands of ballots being damaged during the counting process.

The unveiling of the new party leader was supposed to get underway at 6 p.m. ET on Sunday, but just 30 minutes before the show was set to get rolling, the party announced it was behind schedule in tabulating the winner.

It was 12:20 a.m. Monday morning when the results finally began to be unveiled.

Over the more than four hours of waiting, the picture of what was happening in the counting room became clear: The envelope-opening machines being used were “slicing through” a percentage of the 174,849 mail-in ballots, resulting in “several thousand” being damaged, according to the party.

Party officials have yet to offer a precise figure, but said that thousands of ballots were ripped or damaged and either had to be carefully scrutinized to establish the markings, or new ballots had to be marked with the same data, a process that took longer than anticipated.

The support is being calculated in points, with 100 points allocated to each of the 338 ridings, meaning there are 33,800 points up for grabs. The winner needs to secure at least 16,901 points to win.

The results following the first ballot are as follows:

This is a breaking news update. Previous story follows.

The naming of the next leader of the Conservative Party of Canada has been delayed for hours, after thousands of ballots were damaged.

The envelope-opening machines being used were “slicing through” some of the 174,849 mail-in ballots, resulting in “several thousand” being damaged, according to the party.

By 9 p.m. around 98 per cent of the ballots had been counted. The remaining three per cent of ballots were ripped or damaged and either had to be carefully scrutinized to establish the markings, or new ballots had to be marked with the same data, a process that is taking longer than anticipated.

“It has to do with the size of the envelope. We shrunk the size of the envelope to make sure that people would be able to get their ballots on time and back in because of COVID, and the machines aren’t jiving as well as they did last time,” Conservative Leadership Election Organizing Committee (LEOC) co-chair Lisa Raitt said in an interview on CTV News Channel. “We’re processing as quickly as we can.”

The deadline to submit ballots was 5 p.m. ET on Friday, but the tallying of the ballots submitted by party members didn’t begin until the early morning hours on Sunday.

The party initially cited the record number of ballots cast, coupled with the COVID-19 restrictions in place where the tabulations are taking place as the cause of the hold-up. The ongoing pandemic forced the party to decide the winner using mail-in ballots only, the first time the party’s had to process mail-in ballots on this scale.

The restrictions on indoor gatherings also meant that instead of crowds of supporters packed in to celebrate, each candidate will be watching the results from separate rooms at an Ottawa convention centre, with small bubbles of family and friends.

The first round of results was set to be revealed during an event slated to start at 6:00 p.m. ET, but as of 9 p.m. the estimate was it would take another hour before the first ballot results would be ready to be declared. Raitt couldn’t say why the party announced the delay just 30 minutes before the big event was set to get underway.

Despite many party supporters viewing the race early on as a tight fight between frontrunners Peter MacKay and Erin O’Toole, the unprecedented nature of 2020 has left the door open to surprise results, depending on how the support for a surging Leslyn Lewis and social-conservative-backed Derek Sloan shakes out.

If the second and third ballots are needed to determine a winner, they will be revealed in quick succession, the party says.

Ahead of the data being released the party went ahead with the pre-result aspects of the evening, including speeches from Conservative Party President Scott Lamb and outgoing leader Andrew Scheer.

During his address, Lamb highlighted that the Conservatives won the popular vote in the 2019 federal election campaign, and thanked Scheer for his years at the helm.

“Andrew Scheer kept the party unified. He has listened to and understood all points of view in our big Conservative tent. He built momentum to put our party into contention to win government again, winning key byelections that we had not won in generation, building our party’s lead in fundraising and welcoming Liberals to join our party,” Lamb said.

In his speech, Scheer vowed to do everything he can to help his successor find the common ground among the various factions of the party.

“After tonight, let’s all rally behind a new leader and do everything we can to make sure that the next leader of the Conservative Party becomes the next prime minister of this great country,” Scheer said. “For the last few months, the different candidates and their supporters have been highlighting the differences between them, after tonight let’s all come together.”

“We are in an excellent position, but we cannot be complacent. Our party’s unity has been tested in the past and media love nothing more than writing about disgruntled Conservatives, so we cannot give them that opportunity,” Scheer said.

Scheer touted he is leaving the party without any debt, after questions were raised about his expenses during the campaign.

He also urged Conservatives to be a “silent majority” no more. “Don’t be afraid to challenge leftist professors or public figures, millions of Canadians share our Conservative values, they just don’t all know it yet,” Scheer said.

Once a victor is named, it’ll mark the start of a new chapter for the federal party, and whoever wins will inherit the party at a key moment.

Ahead of the results, each campaign sought to highlight their candidate’s strengths in leveraging the reality of a largely virtual campaign and get-out-the-vote efforts gathering ballots from every corner of the country in time for them to be counted.

The COVID-19 pandemic drastically altered the timeline and campaigning strategies each team had, but with the prospect of a snap federal election on the horizon the candidates having to learn how to hold Zoom rallies and Facebook Live announcements could come in handy if they will soon have to find public health-friendly alternatives to shaking hands and kissing babies.

As Scheer stated, the next leader will also need to immediately work to establish party unity after the sometimes fractious and months-long leadership race.

Rallying the party across the country as well as the cadre of 121 MPs in Ottawa will be essential, as the Liberal minority has suspended Parliament to regroup amid talk of a snap election.

The winner will have to soon spell out how they plan to be an effective Official Opposition, and their path to defeating Prime Minister Justin Trudeau in the next election, which could be called in a month’s time, depending on the outcome of what’s set to be a series of key confidence votes once the House of Commons reconvenes on Sept. 23.

“The alienation of the West is real. And we have to make sure we reconcile East and West, Quebec and the social conservatives with the broader tent,” said Conservative MP and one-time candidate Marilyn Gladu on CTV News Channel.

The new leader was expected to have their first chance to spell out their ideas on Sunday night when they take the stage to give their first speech as the head of the party, but it remains to be seen whether that’ll go ahead as planned due to the delays.