Home  »  News   »   Love in the time of COVID-19: From romantic distancing to ‘apocalypse’ partners 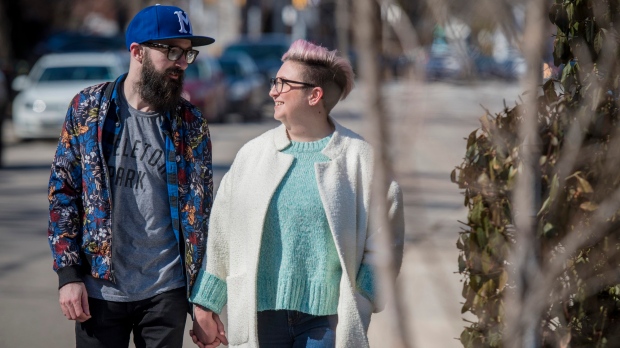 They say love always finds a way — even in the midst of a world-altering pandemic.

The impacts of the novel coronavirus have rippled through almost every aspect of society, and matters of the heart are no exception.

The COVID-19 crisis has brought many Canadians closer than ever in coupled isolation, and forced others apart through physical distancing.

Here are some stories about love in the age of COVID-19.

Till the “apocalypse” do us part

Steph Davidson and Will Kemp may have just met on Christmas Eve, but in “COVID time,” it feels like they’ve spent countless holidays together.

Perhaps that’s partly why, three months into their romance, Davidson, 37, and Kemp, 31, are engaged to be partners in marriage and the “apocalypse.”

As the novel coronavirus swept across the globe, the couple fast-tracked their relationship. Not long after Kemp sealed their first date with a high five, he was carrying his grandmother’s wedding ring in his backpack.

It helped that the lovebirds lived just around the corner from another in west-end Toronto. That convenience became crucial as the COVID-19 outbreak shut down much of the city, leaving them to rely on one another.

Despite the looming danger, Davidson said the chaotic circumstances helped strip away the fronts most people put on while getting to know each other.

“We’re learning what kind of support the other person needs … how each of us respond to a crisis and what strengths we each bring,” said Davidson.

Julie Easley and her ex resolved to remain friends after ending their romantic relationship about five years ago.

They’ve stayed such good friends, in fact, that he and his young son moved into Easley’s home outside Fredericton to pool their resources for the pandemic.

As a former item, Easley said they are accustomed to each other’s rhythms, and she still has a bedroom set up for when his son sleeps over.

“These are unconventional times, but our friendship and relationship is unconventional,” said Easley, 44. “When you’re living together, it’s about liking someone as much as it is about loving someone.”

Closer from a romantic distance

When Jaden Chattargoon hit it off with someone at a queer event last month, they both decided to take things slow and get to know one another before getting too physical.

But Chattargoon, who is trans non-binary, didn’t anticipate that after a handful of dates, the COVID-19 outbreak would make physical contact a nonstarter.

Now, the 26-year-old is keeping up the connection online by exchanging messages, voice clips, photos and videos throughout the day.

Chattargoon is also cooking up remote displays of affection such as virtual dinner dates and dropping off romantic gifts and notes.

Paradoxically, Chattargoon believes the distance has brought the two of them closer together, which will make their pending reunion all the more rewarding.

“I think it’s going to break down those walls we had up,” said Chattargoon. “It’s going to push us past that shyness, and make us feel comfortable with one another.”

I got you, babe

Over the past seven decades, Terry and Morley Bernstein say they’ve learned to be “alone, together” as childhood friends who set off on individual paths, then reunited as husband and wife 20 years ago.

The Bernsteins don’t expect that will change over two weeks of self-isolation in their Winnipeg home after returning from Florida. The couple said they’ve managed to strike a balance between pursuing solo activities and enjoying each other’s company.

Not all of their contemporaries are so lucky, Terry Bernstein said, so they’re making an effort to connect with friends who live by themselves, as well as couples who sometimes wish they did.

She said a friend shared a barbed joke from her husband: “He said, ‘Only one of us will come out of this quarantine, and it won’t be you.”‘

When Joey Lee of Vancouver and Travis Williams of Ferndale, Wash., first clicked online, the prospect of long-distance dating didn’t seem all that daunting, given the hour’s drive between their cities.

For the first few months of their relationship, the couple took turns visiting one another roughly every other week.

But as COVID-19 hit both their countries, Lee said it soon became clear that bilateral relations could soon pose a barrier to their blossoming relationship.

Last weekend, the 31-year-old executive made the difficult decision to head south to see Williams one last time, knowing she’d be forced into 14 days of self-isolation upon her return.

Since a mutual ban on recreation travel between Canada and the U.S. took effect Friday, Lee doesn’t know when she’ll see Williams next. But she’s confident their bond is strong enough to survive a pandemic-induced separation.

“I’ve waited a long time to actually meet somebody that I connect with like this,” she said. “It’s worth it to me to just wait it out.”

After 10 years of marriage, Crystal and Ryan Smith of Brantford, Ont., try to keep the spark alive by going out on weekly date nights.

But that hasn’t been an option since the COVID-19 outbreak left them with nowhere to go, and their two kids bouncing off the walls from boredom.

With Ryan Smith still working full-time at a factory, the couple said carving out half an hour of alone time can be a challenge.

Ryan Smith said the key has been adjusting their expectations to focus on what they have, rather than the things they’re missing.

“For the time being, our intimacy is more family-related instead of one-on-one,” he said. “We’re committed to making it through and doing the best that we can with a horrible situation.”

This report by The Canadian Press was first published March 22, 2020.