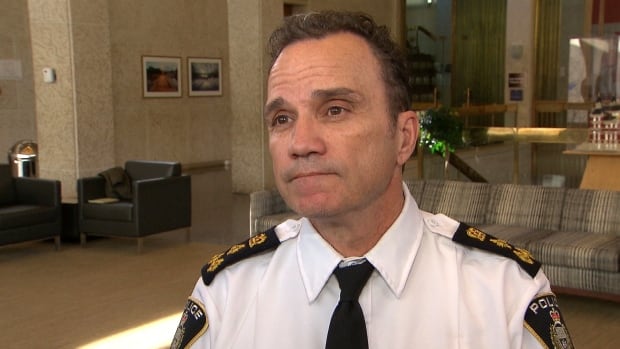 “We need to ensure the people in our custody are treated better,” Smyth told a police board meeting on Monday.

Typically, a prisoner spends only a brief time in detention for processing before being transferred to the provincial Remand Centre in Winnipeg to await a bail hearing.

On April 1, Manitoba Justice suspended its agreements with police agencies regarding such detentions, due to the coronavirus pandemic.

Prisoners are no longer accepted into provincial jails before they are seen by a judge or justice of the peace. Under the new rules, police now have to house those people until the courts remand them into custody or order their release.

That has caused a delay of “unreasonable lengths of time in a facility not intended for that purpose,” Smyth said.

He described the cells as small rooms with no toilets, no furniture, no mattresses and no food service. The only thing in them is a concrete bench.

They have been crowded, leading to fights. Prisoners have urinated, defecated and vomited in the rooms because there are no bathrooms, Smyth said.

Since April 1, the police service has processed 1,100 prisoners. Of those, 625 have been held while waiting to transfer to the Remand Centre. The shortest wait was three hours and the longest was 43, Smyth said.

More than 100 prisoners have been held more than 24 hours.

“These people we are taking into custody are not being treated with the respect and dignity that they’re entitled to,” Smyth said.

The delays have also caused undue stress for staff at the HQ who usually just handle administrative duties and facilitate transfers, Smyth said. They are now having to escort prisoners for bathroom breaks, for phone calls with lawyers, or for appearances before a judge or justice of the peace.

They have also had to make food runs on occasion. The Remand Centre has delivered sandwiches for prisoners but there have been times when the centre had nothing to spare, so police service staff had to go out and buy some, Smyth said.

He has reached out to Manitoba’s justice minister as well as other justice officials to express his concerns and see if the restrictions on sending prisoners to the Remand Centre can be lifted.

As the number of COVID-19 cases continues to dip in Manitoba, “what made sense on April 1 does not make sense now,” Smyth said.

There has been “no meaningful response” from the province or justice officials, which is why he is took the matter to the police board, he said.

“I have nowhere else to turn,” Smyth said.

“These restrictions were imposed on us. I would have liked the opportunity to collaborate with justice officials rather than be told to do something.”

Board member Brian Scharfstein urged the board to reach out to the province as soon as possible.

“We have to act and respond quickly. It’s a matter of human rights.”