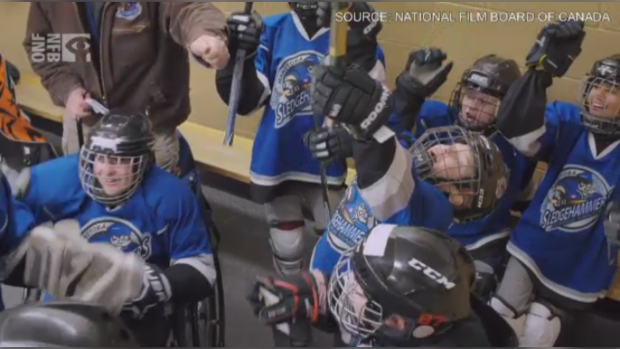 WINNIPEG — The film “The Tournament” was written and directed by local filmmaker Sam Vint, and it follows the Manitoba Sledgehammers – a youth sledge hockey team – as they travel to a tournament down south.

Vint said he and his son went to their first sledge hockey tournament five years ago.

“It was the first time we’d gone, we were kind of new to the sledge hockey world, and it was magical,” said Vint.

He said his family had such a good time that his wife suggested he make a documentary about sledge hockey.

The sport is designed for players who have physical challenges. Vint said it gave his son a chance to be a part of a team, and play a sport.

“On regular land, he’s in a wheelchair. He’s got all kinds of things that get in his way,” said Vint. “You get (him) on the ice, and he can fly.”

Sam’s son, Isaac Vint, flies all over the ice in his Dad’s documentary, and he’s one of the main characters in the film.

“I’m just excited for everyone to finally see it,” said Isaac. “It’s a really good movie, and my dad’s the director, and I’m really happy for him.”

Isaac said playing sledge hockey is “his thing”. It’s fun, and it makes him feel good.

Fellow Sledgehammer Evan Hasom said sledge hockey gave him an opportunity to play hockey like his older brother – and there were some things he wanted to do.

“Basically just being on a team, and having fun, and scoring goals,” said Hasom.

Issac said his teammates are his best friends. He has fond memories of the tournament, on and off the screen.

“It’s really fun. It’s like the best tournament I’ve ever been to.”

Vint said the movie highlights the power of sport – and the confidence it can instill in young people.

“The main thing holding back any kid with any challenges is people’s perception,” said Vint. “We’re hoping to change perceptions with this film.”

The film will be released on June 17th and is available for streaming free of charge on the National Film Board of Canada’s streaming site.