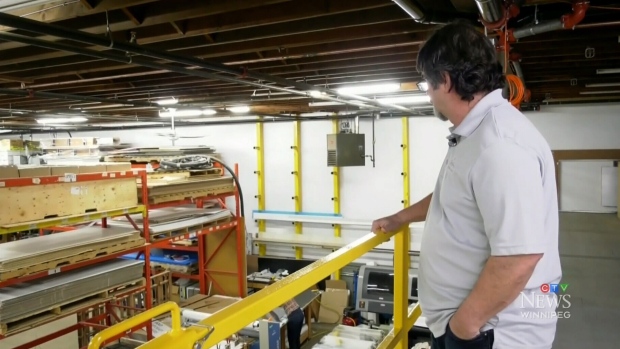 WINNIPEG — The province is asking for help from business to battle the ongoing COVID-19 pandemic.

Even before Wednesday’s plea from the government, local businesses were already stepping up — whether it was by making medical gear, hand sanitizer, or plexiglass shields.

Acryl Design in Winnipeg has had a busy few days. The business typically manufactures items, from modular escape rooms to parts for the furniture industry, but last week production shifted to plexiglass shields.

“We’ve sent them to B.C., Alberta, and now these are going to Saskatoon,” said President John Wardrope, gesturing to his crew working on the latest shipment of shields.

The next batch will be made for stores in Winnipeg, and it’s possible the design could be used out east, as well.

“We designed them Thursday. We started Friday, and this is the end of the 2,500 that we’re producing probably today and tomorrow,” Wardrope said.

The shields — or sneeze guards as Wardrope calls them — will be installed around pharmacy and post office counters in grocery stores. When production began last week, he said things ramped up quickly. Typically, there are four people working the floor but Acryl Design hired 10 more people to help.

Wardrope said everyone has been working 12 hour shifts to get shipments out.

OTHER BUSINESSES CHIPPING IN

“We shipped every ventilator that we possibly could from our warehouse, and we’ve converted some ventilators that were one type into another type so we could get it into the adult world,” said Olivier.

While his warehouse has been preparing for a while, he said they’re even busier than they expected.

“We’re getting orders across Canada,” said Olivier. “For the last three weeks, it’s been absolutely wild. Beyond our imaginations.”

Other companies, like Canada Goose, are shifting their focus completely — going from making parkas to scrubs and gowns. Production will take place both in Winnipeg and Toronto. Canada Goose said it plans to make 10,000 units, with the gear being donated locally.

READ MORE: Vodka to hand sanitizer: how distilleries are fighting the outbreak

All of these initiatives came before the province’s plea Wednesday asking local businesses to help stock up the supply of personal protective equipment.

“This initiative is designed to help remove barriers that will allow Manitoba businesses and manufacturers to redeploy capacity towards the production of essential equipment,” said Manitoba’s Health Minister Cameron Friesen.

He said the province isn’t out of supplies — it’s just being proactive.

“We’re doing this out of an abundance of caution,” said Friesen. “Manitoba is arguably ahead of many other provinces when it comes to preparations.”

For businesses that are able to help with supplies, the province said a form can be filled out online detailing how they can assist. (LINK TO THAT LINK)