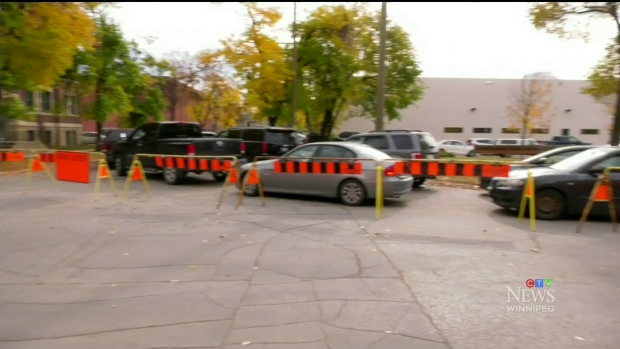 WINNIPEG — More than 180,000 COVID-19 tests have been performed in Manitoba since early February.

But with cases spiking in recent weeks, there’s an uptick in people waiting in line to get tested.

Nurik Nurmagambetov waited in line at the Manitoba Public Insurance drive-through testing site on Main Street for more than four hours with his son, after someone in his classroom tested positive for the virus.

“My wife was here yesterday at noon, but they got turned away because of capacity. So today we arrived here at 8:30 in the morning and we’re still here,” said Nurmagambetov.

Nurmagambetov said waiting in line doesn’t bother him, it was having to come back the next day.

“We’re here waiting because we have a concern, and being turned away (is) unacceptable in my view.”

Shawn Vallis waited in line for more than three hours.

He said when he arrived, the line was 8 blocks long, stretching from Charles Street all the way to Macray and Main Street.

“It’s too bad there’s a nine to four (window) every day,” said Vallis. “We’d hope there’d be a little more extended hours for testing during a pandemic.”

Some residents in the area aren’t pleased with the long lines.

Ian Flamand lives across the street from the drive-through testing site, he said some people in line aren’t respecting the community, and with no washrooms on-site, some have been using his back lane instead.

“The neighbors have seen people coming back and forth urinating everywhere,” said Flamand. “People don’t wait in their vehicles, they get out and go for a nice stroll around our neighborhood.”

Chief Medical Officer for Dynacare, Dr. Jenisa Naidoo said starting Wednesday, there will be a COVID-19 mobile testing site parked on Portage Avenue that will be able to perform an additional 80 tests a day.

“The intent is to distribute volume to more sites, and hopefully take away some of the lineups,” said Naidoo.

Naidoo said the COVID-19 assessment sites will be separate from routine collection sites.

Patients who access Dynacare services for something other than COVID-19 won’t come into contact with someone who is being tested for the virus.

Naidoo said Dynacare plans to have three more drive through testing sites up and running by mid-October, two in Winnipeg and one in Brandon.

Good news for Nurmagambetov, he doesn’t want to see anyone else waiting in vain.

“Spending a day and then potentially (getting) turned around? Yes I would advocate for more testing sites,” said Nurmagambetov.