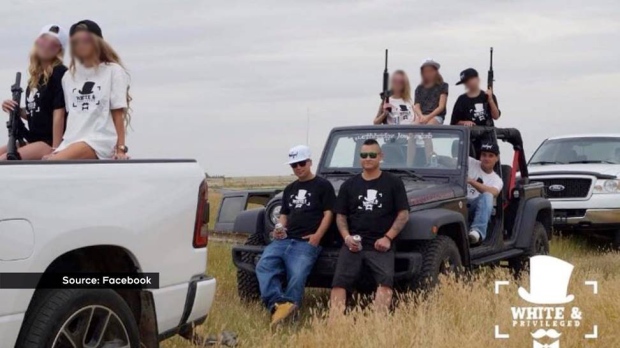 CALGARY — Widespread public backlash is being directed at a Lethbridge-based clothing line that appeared to be sending a message some say is racist.

Online ads included photos of what appears to be white teenagers or young adults — some holding guns — wearing T-shirts, ballcaps and hoodies with the logo ‘White and Privileged.’

Anger and disgust was expressed on social media after a Calgary podcaster posted the photos with the caption, “Straight out of Lethbridge. Racism looks like this.”

The site was promptly reported to Facebook, Instagram and Shopify, as well as Ford and Jeep, whose vehicles were used in the ads.

Jeep Canada responded, calling the posts “disturbing,” and added, “Inclusion, the celebration of diversity and the absolute rejection of racism and bigotry are foundational corporate values at FCA. We will investigate.”

Anti-racism advocates say people need to be aware of the language they are using.

Jordan Ledyit, lead of Lethbridge GUARD (Group United Against Racial Discrimination) said whether it is intentional racism or not, using racially exclusive language is a problem.

“When you use terms such as white privilege in the context that this individual did, you are creating room for racist people to have a voice,” she said.

Ledyit said making “in-groups” and “out-groups” has been a problem for centuries.

“The problem is there are going to be racist people who take it seriously,” she said.

Many people not only complained online but also reported the site to Mayor Chris Spearman. The mayor was not available for comment Friday but responded by email, saying he immediately reported the information to police.

“This behaviour is not tolerated or acceptable in our city,” he wrote.

The City of Lethbridge said it was made aware of the site Thursday and regulatory services confirmed the operators do not have a business licence.

The clothing company is operated by a Lethbridge man and his cousin. CTV Lethbridge was not able to get in contact with them but a woman who identified herself as the man’s girlfriend said they have now taken down both the Facebook page and the Instagram account.

She told CTV News they have received numerous threats and she no longer feels safe in their house after their address was posted online.

The woman, who said she is part Aboriginal and part Spanish, maintains her partner is not racist. She said her boyfriend started the business about three months ago, adding, she tried to tell him it wasn’t a good idea.

The company’s website remained active as of 6:30 p.m. Friday, with T-shirts, hats and hoodies being advertised for sale.