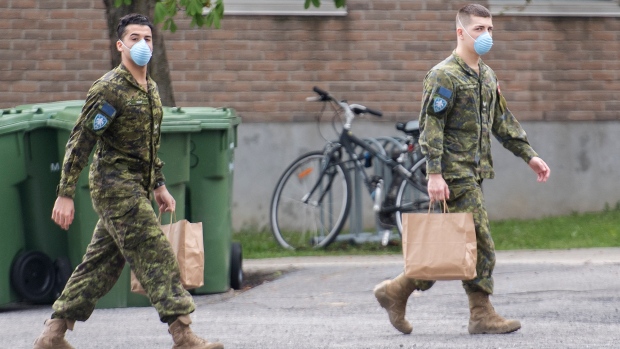 MONTREAL — Quebec Premier Francois Legault has asked that 1,000 members of the Canadian Armed Forces remain in Quebec until Sept. 15 to continue helping out in the province’s long-term care facilities, which have been battered by COVID-19.

Legault said that the extra time would give the province a chance to undertake a massive hiring and training spree to put in place 10,000 new full-time workers at the facilities.

The workers would be paid $21 during their training, Legault said, with a guaranteed full-time job at a pay rate of $26 an hour upon completion of the training.

The premier made the declaration Wednesday afternoon in response to his government’s release of a report by the Canadian military into conditions at the province’s embattled long-term care facilities, known as CHSLDs.

Some 1,050 of the 1,350 military personnel deployed to Quebec amid the pandemic have worked at the facilities.

The 60-page report, signed by Canadian Armed Forces Colonel T.M. Arsenault, details the observations made by military staff that worked at 25 of the residences in the Montreal area over the past few weeks.

“According to our observations, the critical need for CHSLDs is an improved level of staff with medical training,” Arsenault writes.

Premier Legault said he wasn’t especially surprised by any of the findings in the report, reiterating that the issues identified as problematic in the CHSLDs by the military are both known and longstanding.

And while he expressed great appreciation for the military’s much-needed intervention in the CHSLDs during the pandemic, he conceded that it was “an embarrassment for Quebec society” to have had to call on the help of the armed forces.

At his daily COVID-19 address on Wednesday in Ottawa, Prime Minister Justin Trudeau said that he spoke with Quebec Premier Francois Legault earlier Wednesday and “reiterated our support for him.”

“Several of the report’s findings, such as the understaffing, are among the reasons why Premier Legault asked for help from the Armed Forces a month and a half ago,” Trudeau said. “These are serious issues that deserved to be brought to the attention of Quebec and we sent them the report last night.”

Trudeau added that he would further address the situation in Canada’s seniors residences and long-term care facilities during his weekly call tomorrow evening with Canada’s premiers.

“I will once again offer our government’s support as they try to get the situation under control,” Trudeau said. “As I’ve said many times, we need to do a better job of caring for seniors.”

“They raised us, they built this country. They deserve better.”

Legault’s office said the premier will be available to answer questions about it at his daily COVID-19 briefing in Quebec City at 1 p.m.

Quebec made the report public a day after Ontario released a devastating report by the Canadian military on the “gut-wrenching” conditions at the province’s seniors’ residences.

More than 60 per cent of the more than 4,100 COVID-19-related deaths in Quebec occurred in the province’s CHSLDs.

Read the report (in French) to see a residence-by-residence report on the 25 Montreal-area CHSLDs at which military personnel have worked:

This is a developing story that will be updated.