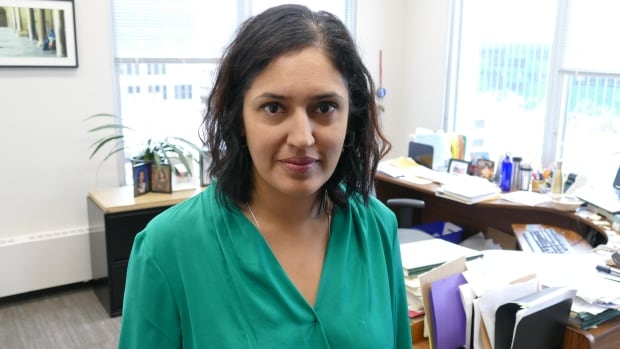 Isha Khan has spent her career upholding human rights. The Winnipeg lawyer may now be facing her most public battle as she takes the helm of a museum under fire over allegations of racism, homophobia, sexism and censorship.

“I’m excited about getting involved in the organization, getting to know the people there, doing the work that needs to be done,” Khan told The Canadian Press.

Minister of Canadian Heritage Steven Guilbeault announced Monday that Khan is the new CEO of the Canadian Museum for Human Rights in Winnipeg.

She is the first woman to hold the position on a non-interim basis since the museum opened in 2014. She is also the first person of colour in the job.

Khan has been the board chair of United Way Winnipeg and, since last October, worked to review conditions of confinement of incarcerated federal inmates. She served as executive director of the Manitoba Human Rights Commission from 2015 to 2019. Before that, she was the commission’s senior counsel.

“Khan’s demonstrated commitment and dedication to human rights make her highly qualified for the position of director of the Canadian Museum for Human Rights — the first museum solely dedicated to the evolution, celebration and future of human rights,” Guilbeault said in news release.

Pauline Rafferty, the museum’s board chair and interim CEO, said Khan’s appointment is a crucial step toward rebuilding trust. Rafferty said in the news release that Khan has the experience to lead the institution “through the difficult process of self-reflection and positive change that has already begun.”

Rafferty apologized last week after an independent report found employees experienced systemic racism and other mistreatment at the museum. The report included 44 recommendations.

After the museum posted images of a Justice 4 Black Lives rally in June, stories from employees were posted online by a group called CMHR Stop Lying. Current and former employees said it was hypocritical of the museum to bring up the rally because of racism staff faced at work.

Some employees said they had to censor displays about LGBTQ history at the request of some school groups that visited the museum.

The stories led to the resignation of CEO John Young, who had already planned to step down when his term finished at the end August.

“Clearly with things that have gone on recently and the recent report, I have some clear work to do and have been tasked with that as a priority,” Khan said. “I’m just really eager to get started.”

Khan said she doesn’t generally identify herself by her ethnic or religious background, but she was born and raised in Winnipeg to a family of Pakistani decent. She sits on the executive committee of the local chapter of the Canadian Council of Muslim Women.

“I think that it is disappointing that in 2020 this is still something remarkable, but if it serves to help in breaking down some barriers, I am very happy to be part of it,” she said.

Khan did her undergraduate studies at the University of Manitoba and went to the University of Victoria for law school. She said she was always interested in human rights and it inspired the jobs she took. While practising law in Calgary, she focused on labour and employment issues.

She moved back to Manitoba about 10 years ago to work with the human rights commission.

The museum role is a shift in her career, Khan said, from active legal work to education.

She said she is excited to work with staff to build a museum that the city and country can be proud of.

“My focus is going to be on ensuring the museum is inclusive, it has a respectful workplace, so that we can engage with the public and be an exemplary workplace for others to look at and to help promote the idea of rights and dignity for all.”