Home  »  News   »   Keep your distance: What social distancing means, and why you’re being asked to do it 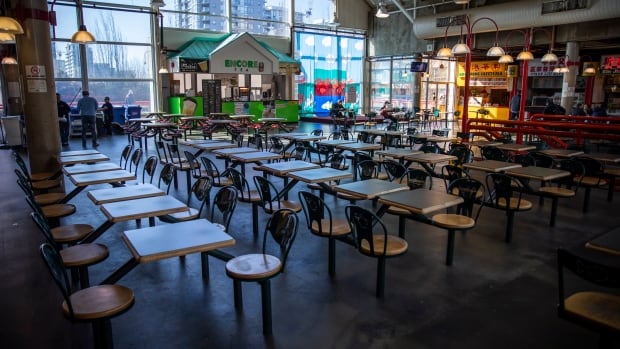 As Manitoba confirms its first cases of the new coronavirus, public health officials are urging every Manitoban to play their part in slowing the virus’s spread.

So far, Manitoba has four confirmed cases of COVID-19, the disease caused by the virus.

Some of the advice is familiar from flu seasons gone by — wash your hands, cough into your sleeve and stay home when you’re sick.

But Manitobans are also being urged to practise something less familiar: social distancing, a set of techniques officials say could help control the virus.

Dr. Brent Roussin, the province’s chief provincial public health officer, said the strategies are based on how the virus gets transmitted.

“Even when we can’t take every single precaution, if everyone’s taking the precautions they can, we’re going to dramatically reduce the impact of this virus.”

Here’s a breakdown of what that means.

What is social distancing?

Social distancing is most easily understood as deliberately creating more space between people, said Dr. Jason Kindrachuk, an assistant professor and Canada Research Chair in emerging viruses at the University of Manitoba.

That works on two levels. The first is keeping one person physically farther from another to limit spread of illness between them.

The other is limiting the size of social gatherings, which accomplishes the first goal while also ensuring that if new cases happen, they don’t happen all at once.

The latter goal has been called “flattening the curve” — spreading out the cases of illness over time, so the health-care system can handle cases as they come.

Social distancing techniques vary widely, from avoiding handshakes to going into isolation. In Manitoba, public health officials have announced school closures and are discouraging gatherings of more than 250 people.

They’re also asking the public to use a few techniques in particular:

Other organizations are also bringing in social distancing measures. Universities are moving to online classes, for example, while Landmark Cinemas at Grant Park is only selling 50 per cent of seats in its movie theatres so people can sit father apart.

WATCH | How social distancing can help prevent the spread of COVID-19:

Social distancing measures like working from home, school closures and cancelling sporting events could lead to a drop of new infections of coronavirus. 1:54

“Because of the similarities … amongst all the different coronaviruses, what we can say is pretty definitively that this virus is also spread by respiratory droplets,” he said.

Washing your hands, avoiding touching your face and cleaning frequently touched surfaces are ways to prevent infected droplets from getting into your respiratory tract — or into someone else’s — through touch.

Covering coughs and standing farther away from people, meanwhile, prevents spread through droplets in the air.

This part is based on scientists’ understanding of those large droplets, and how they behave once they’ve been coughed or sneezed out into the air.

“The easiest way to explain it … comes across, maybe, a little bit gross,” said Kindrachuk. But, like many flu prevention techniques, it’s simple to understand.

When infected people cough or sneeze, they spray the droplets from their respiratory tract, he explained. Due to their size, those droplets can only travel so far — which scientists think is about two metres, or six feet.

Why do scientists think this will work?

Planning for how to tackle this new coronavirus comes from a few different sources. Those include an understanding of how other coronaviruses behave, lessons learned from previous pandemics, and early research on the new coronavirus itself.

“In the wake of the pandemics of influenza in the latter half of the 20th century, we started to realize that transmission seemed to be … more frequent in large gatherings, and particularly when those gatherings happened in enclosed spaces,” said Dr. Matthew Oughton, an assistant professor of medicine at McGill University.

It’s hard to study pandemics, and scientists still don’t know everything about the new coronavirus, said Oughton, who is also an attending physician in the division of infectious diseases at the Jewish General Hospital in Montreal.

That means there’s a limited evidence base for scientists and public health officials to use to guide decisions. But Canada has the advantage of past experiences with pandemics, such as SARS and H1N1, as well as a strong health-care system, he said.

“We don’t have that sort of strength of randomized, double-blinded, placebo-controlled trials,” he said, but the recommended techniques are based on “accumulated decades of research, looking at transmission of various viruses or infections in different … limited populations, and extrapolation to what seems to make sense.”

Dr. Annalee Yassi, a professor and Canada Research Chair at the school of population and public health at the University of British Columbia, said the behaviour of the new coronavirus so far also supports scientists’ beliefs about how it works.

For example, if it was aerosolized (carried by air, rather than through droplets), it would likely have infected far more people, said Yassi, who is also a specialist in public health and occupational medicine.

“It’s being followed very, very carefully now, because we’re really in the midst of things and it’s easier to look in hindsight,” Yassi said.

But “everything that we see epidemiologically, as well as what we know about the virus, suggests that that’s mode of spread.”

Dr. Joel Kettner, the province’s former chief public health officer, said officials need to weigh many factors — including expected severity of an illness and how effective management will be — before implementing major measures.

He wants to hear more about how policy decisions have been made here.

“I’d like to see more about what [infection] numbers are and … the sort of range of scenarios that are being prepared for,” he said.

“And then I would like to see more of the rationale and expectations of each of these different social distancing measures that are being done.”

What else can I do?

Yassi stressed the importance of following public health advice, including the advice that wearing masks won’t provide benefit to members of the public.

The masks could actually do more harm than good, she added, because people wearing them are more likely to touch their faces as they fidget with the masks. What’s more, they’re needed by health-care workers who could actually benefit from them.

Hand-washing and practising good cough etiquette — coughing or sneezing into your sleeve, for example — are still essential tools, she said, even if they seem simple.

WATCH | How to wash your hands like a surgeon:

Can washing your hands really slow the spread of COVID-19? That depends on how you clean them. 4:16

“We still see people coughing into their hands, which makes me think that people don’t really understand,” Yassi said. “Yes, things are intuitive. But … some of these things are not as common practice as we would like them to be.”

Oughton said it’s critical for the public to follow the advice of health officials and doctors.

“This virus is proving, in a way, that we are all connected,” he said.

“And if everyone can contribute and collaborate to this, we’re all going to get through this. It’s going to take some work, but we’re going to make it through the other side.”