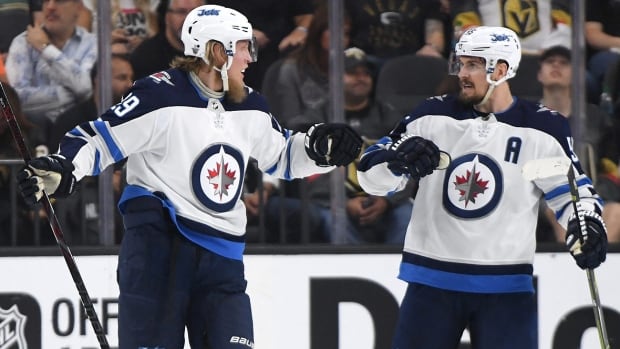 While offering no update on the status of two injured forwards on Sunday, Winnipeg Jets head coach Paul Maurice continued to direct criticism at a player he felt was responsible for one of his key charges leaving the ice.

After saying Matthew Tkachuk delivered a “filthy, dirty kick” to the back of Jets centre Mark Scheifele’s left leg in the first period of Calgary’s 4-1 series-opening win on Saturday night, Maurice was asked Sunday if he feels the Flames winger is a dirty player.

“If you sin once are you a sinner? Sin 10 times? I don’t think he came off the bench and said, ‘Hey I’m going to see if I can go stab the back of Mark Scheifele’s leg with my skate.’ I think he got to that point and I think that’s exactly what he did,” Maurice said.

Maurice wouldn’t confirm Scheifele, who didn’t return, suffered a cut. Nor would Maurice say anything more about star winger Patrik Laine, who headed to the dressing room after a collision with Flames captain Mark Giordano in the third period.

Winnipeg Jets centre Mark Scheifele needed help getting off the ice after being hit along the boards by Matthew Tkachuk. 1:44

The lack of injury information came as no surprise during the COVID-19 pandemic. The NHL and NHL Players’ Association agreed earlier this summer that clubs are not allowed to disclose injury or illness information during the league’s return.

No time to sulk

“I don’t know if I’d say dirty, I would say reckless,” Lowry said when asked to describe Tkachuk. “We all play hard, I don’t have the cleanest track record either. When you play a physical brand of hockey, sometimes you step over the line. That was one of those plays where it’s kind of reckless.”

Paul Maurice didn’t mince words in his post-game press conference when addressing the incident that took place between Matthew Tkachuk and Mark Scheifele. 6:25

The Jets don’t have time to sulk. Game 2 of the best-of-five series is Monday afternoon at Rogers Place, with the third game of the qualifying round just over 24 hours later.

Maurice is hoping his team’s familiarity with adversity will help going forward.

“The inexplicable is the story of the Winnipeg Jets from you’re a defenceman [Dustin Byfuglien] not showing up to play, losing a veteran [Bryan Little] for a season, maybe for a career, to all the inexplicable things that happened to the hockey team this year,” Maurice said.

“This would be par for the course. I think we had the pause and thought we had gotten out of that situation. Last night was a reminder we’re right back in it.”