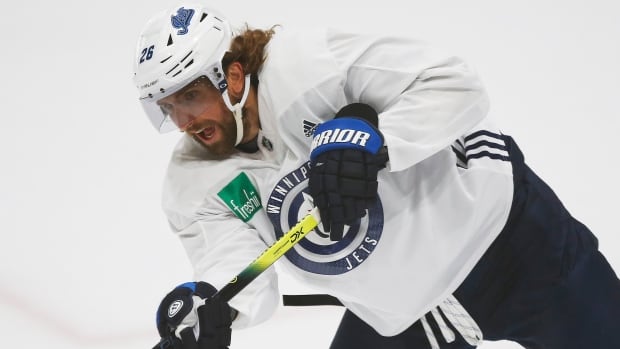 Like many parents, Blake Wheeler and his wife Sam stickhandled homeschooling, cooking, and cleaning — not to mention refereeing disputes between their three kids —through the first four months of the COVID-19 pandemic. Now, the Winnipeg Jets captain is about to step away from the domestic chaos to skate in the National Hockey League Stanley Cup qualifiers in Edmonton.

“We were in south Florida, in the epicentre of everything going on right now,” Wheeler told reporters via Zoom on the opening day of training camp. “It’s definitely been a nerve-wracking and anxious few months. “When you think about everything going on in the world – and then you think about going back and playing a game – it’s sometimes hard to put that in perspective.”

Wheeler and the Jets practice in Winnipeg one last time Sunday morning and then embark for the Alberta capital for an undetermined time period. The longer they stay, the deeper their run in the chase for a title. All the uncertainty makes it hard for Wheeler to say goodbye to Sam and the kids.

“It’s been very challenging,” he said. “So the thought of leaving all that on Sam’s plate is probably something I haven’t come to terms with yet.”

If it’s any consolation, Wheeler and the Jets won’t have much spare time to ruminate. First, they clash with the Vancouver Canucks on Wednesday night in their first and only exhibition game. Then they open the qualifying round next Saturday in the first of a best-of-five against the Calgary Flames.

“The entire time during the pause, after one day I was ready to play hockey again,” said Jets centre Mark Scheifele, who amassed 29 goals and 73 points in 71 games this season. “There was obviously a lot to deal with, but now that we’re back to hockey, that’s the excitement — playing the game we love every single day.

“No matter what it is, we’re playing hockey and we get to compete for the Stanley Cup. That’s the ultimate dream.”

The Jets (37-28-6) enter the qualifiers as a team that spent most of the 2019/20 campaign on the playoff bubble. But look closely, and there’s reason for optimism among the local fanbase.

Built for the post-season

In many ways, the Jets are built for the post-season with their size and speed up front. They have a Vezina Trophy finalist in goalie Connor Hellebuyck. And their core players have valuable playoff experience.

“You don’t have to explain to your players what playoffs look like,” Jets coach Paul Maurice said. “Which, you go back two years, we had to. We didn’t really have the guys that have ever played a playoff game, let alone had a long run. “But now we have consecutive years where our drivers are familiar with how the playoffs work.”

In part 2 of 10, Rob Pizzo examines whether the defending champion Blues will come out of the round-robin with the #1 seed.  1:16

The Jets reached the Western Conference Final in 2018. Amid high expectations, they lost their opening-round series last year in six to the St. Louis Blues, who went on to win the Stanley Cup. Scheifele, for one, can’t wait for another opportunity.”

‘Everything on the line’

It’s the adrenaline,” he said. “When you get into a tight game and it’s the third period, it’s the guys that are calm, cool, and collected, but they have that adrenaline buried deep inside them that is ready to come out. “That’s what I’m looking forward to. A real-game situation with everything on the line and that adrenaline starts pumping. That’s what I’m craving the most.”

At age 33, Wheeler realizes his chances of hoisting the Stanley Cup are likely numbered. With that in the mind, he’s following his wife’s advice as he prepares for takeoff to Edmonton.

“When we’ve talked about it, basically what we came down to is she says, ‘Don’t just leave and play just three games. That would be a waste of time. At least give me something to entertain me,” he said. “So, that’s kind of where we’ve left it for now. “Hopefully we can go on a little bit of a run and give everyone back home something to cheer about.”