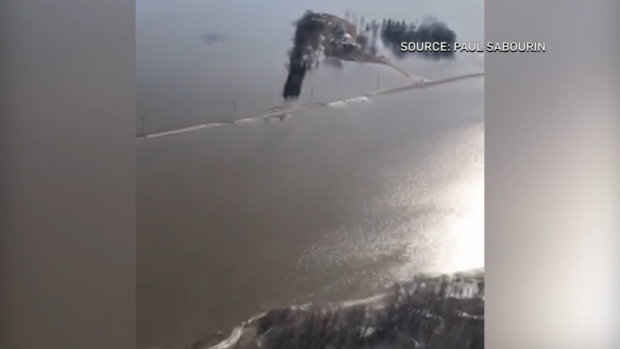 WINNIPEG — As several communities in Manitoba deal with spring flooding, a stretch of highway 246 in southern Manitoba has been hit hard, once again, dealing with major damage to its infrastructure.

Video sent to CTV News by the Rural Municipality of Montcalm shows major flooding along a part of the highway in that community.

“Every spring flood that road is severely damaged,” said Paul Gilmore, Reeve of the RM of Montcalm.

“What you see is a lot of water, but what it’s not showing is the road that it’s going over, the damaged road, that’s basically what you’re seeing out there.”

Gilmore said the river flows on both sides of the roadway, and as floodwaters rise the water covers the road.

He said it’s a reoccurring problem in the area which they’ve been dealing with for many years.

“Every year there’s a flood, this happens, last year we had close to a million dollars damage there,” said Gilmore.

Gilmore said if they don’t get Disaster Financial Assistance from the Manitoba Government they won’t be able to afford the repairs.

“We’ve been lobbying the province to look at a permanent fix on that road to try and eliminate this annual damage,” he said.

“You might spend more to do the permanent fix, but at least it would alleviate the problem.”

On April 9, the RM declared a local state of emergency due to flood conditions in the area surrounding that stretch of Highway 246.

“Six or seven families had no way to access or exit their properties,” said Gilmore.

Gilmore said that stretch of the highway is the worst affected by flooding, but other areas have been hit too.

“Out there it’s drastic, the rest of the municipality it’s not bad, mind you, we did have a number of washouts on lesser important roads.”

It does appear the worst has passed for the RM, Gilmore said floodwaters have started to recede throughout the municipality.

“We’re anxious for them to disappear so the farmers can get in the fields and clear all the debris… But mainly so we can fix our infrastructure so that families can get back to their residences,” said Gilmore.

He believes this year’s flooding conditions will once again have a major financial impact on the RM.

“It’s going to be severe, we think the damage is worse than last year.”

-With files from CTV’s Charles Lefevbre