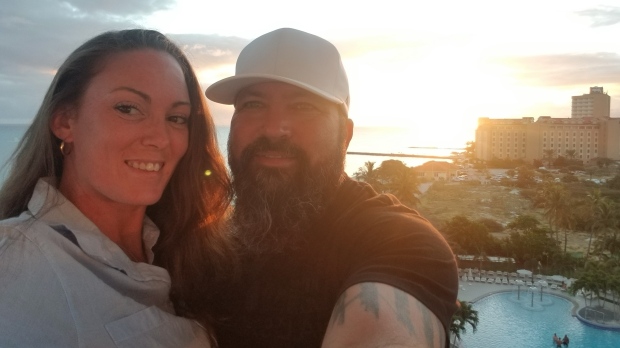 TORONTO — Olivia Walker hasn’t been able to see her fiance, Daryl Higgins, in person for more than seven weeks. Not since the border between Canada and the U.S. closed to all non-essential travel in mid-March as a result of the pandemic.

The couple was set to marry in May, but everything changed after the border shut down.

That’s because Walker is a Canadian citizen living in Chatham, Ont. with her 13-year-old daughter and Higgins is an American residing in Indiana.

“We thought ‘OK, now this won’t go on forever. It was supposed to be over in early or late April or May,” she told CTVNews.ca during a telephone interview on Tuesday. “We thought ‘just hold tight.’”

Before the novel coronavirus outbreak upended their lives, they had planned to marry in Indiana before Higgins would move to Detroit, which is only a 45-minute drive from Chatham. She said, that way they would still be close to each other while her daughter finishes high school in Chatham.

When the border closure was extended last month until May 21, Walker said they realized they may be separated for longer than they initially expected. And on Wednesday, Prime Minister Justin Trudeau said the government is in talks with the U.S. to have their shared border closed for another month.

It’s a distressing possibility for Walker who said she has no hope of reuniting with her fiance because they’re not married yet and they haven’t been living together so they’re not considered immediate family in the eyes of the law.

“It’s devastating,” she said. “You wait your whole life to meet the person that you want to marry and in a time of crisis when all of Canada is being told to hunker down with your families and ride this out and stay home and that option was ripped away from us.”

Walker is not alone in her plight, however, and being married is not necessarily a guarantee for cross-border travel in these uncertain times.

Birgit Heinbach, a Canadian permanent resident living in Delta, B.C. with her teenage son, has been unable to cross the border to see her husband, Ian Geddes, who lives south of the border in Blaine, Wash.

The physiotherapist said she tried once approximately five weeks ago, but she was turned away by U.S. Customs and Border Protection (CBP) officers. She said her husband hasn’t even attempted to cross into Canada since he expects to be turned around because they have separate home addresses and his travel will be deemed non-essential.

“There’s no point in even trying because he can’t cross so he’s just going to be in the same situation that I was in because the borders is solid, closed at this point,” Heinbach said.

The question of who is allowed to travel across the border during the pandemic has been a difficult one to answer for many Canadian and U.S. citizens, according to Nastaran Roushan, an immigration lawyer based in Toronto.

That’s because they’re receiving “mixed messages” from the government, she said.

When the border closure was first announced in mid-March, Prime Minister Justin Trudeau said that exceptions would be made for immediate family members of Canadian citizens and permanent residents.

However, guidance later published on the Immigration, Refugees and Citizenship Canada (IRCC) website says that foreign nationals who are immediate family members of Canadian citizens or permanent residents are permitted to travel to Canada if they’re coming for non-discretionary reasons and “not for reasons that are optional or discretionary, such as tourism, recreation or entertainment.”

Roushan said the issue then becomes how to interpret “tourism, recreation or entertainment” and if other reasons for travelling, which fall outside of those categories, are still considered discretionary.

“Both IRCC and Canada Border Service Agency (CBSA) seem to think that tourism, recreation or entertainment are just examples of optional or discretionary purposes,” she said.

The immigration lawyer said that’s why it remains unclear if family reunification as a reason for travelling across the border is considered discretionary under the current restrictions.

“For them to be interpreting any sort of family reunification as tourism, recreation, or entertainment is a huge stretch,” she said.

According to an update posted on the CBSA website on May 1, all foreign nationals, including family members and spouses or partners of Canadians, must have “an essential reason” to travel to Canada.

“If you do not have an essential reason to travel to Canada, a border services officer may deny your entry,” the notice reads.

Some examples of essential travel purposes on the website include work and study, critical infrastructure support, economic services and supply chains, shopping for essential goods, and for health concerns, immediate medical care, or safety and security reasons.

Ultimately, Nastaran said the decision on whether to allow someone to cross the border lies with each individual border officer.

“Quite frankly, we don’t know exactly what documents the CBSA is relying on, if they have their own internal documents that they’ve published and haven’t made public about what to look for and what questions to ask,” she said. “All we know is that people are getting disparate treatment.”

CTVNews.ca reached out to both the IRCC and CBSA on Wednesday. The IRCC directed questions to the CBSA, which did not provide a comment on the topic.

Walker said she heard cross-border travel these days likened to a game of Russian roulette, where you don’t know what type of treatment you’ll receive until you’re standing in front of a border officer.

“Officers have so much discretionary power to interpret the rules. It’s a 50-50 chance,” she said.

Despite the odds, Walker took her chances and travelled to Pearson International Airport in Toronto on Wednesday afternoon to try to board a flight to Detroit so she can marry her fiance this weekend.

“It’s our last attempt before we just accept the situation, but we have to try at least one more time,” she said.

As of Wednesday afternoon, Walker said she had cleared customs and was preparing to board her flight to Detroit.

Heinbach, too, has something to look forward to this week. She is planning to meet her husband in Peace Arch Park, which is an international park with entries in both Canada and the U.S., on Thursday when restrictions on parks are lifted.

While they won’t be able to leave the park together, Heinbach said she’s looking forward to seeing her husband in person.

“First-degree family should be together. These are tough times. We have to support each other. That’s what we got married for,” she said.