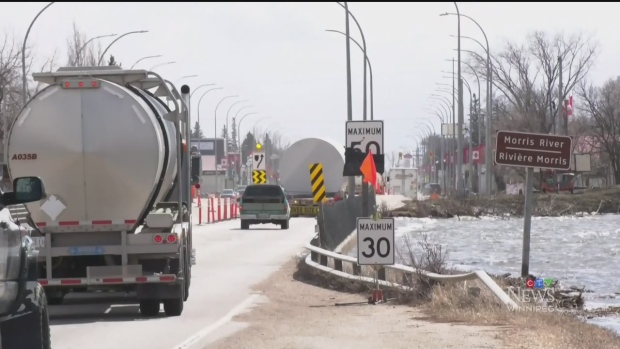 Monday, water levels crept close to the road along PTH 75 in Morris, but traffic continued to flow along the highway.

“It’s a huge relief and we know that a lot of these local businesses are struggling right now,” said Scott Crick, mayor of the Town of Morris.

On Sunday, Infrastructure Minister Ron Schuler took to twitter saying the PTH 75 at Morris could stay open with the use of ramps. It was previously expected that the stretch of the highway could have to close due to flooding.

Its closure has a great impact on the community, according to Crick.

“Anytime Highway 75 closes it’s very difficult for local business, many of which are oriented around providing service to people in the area or people travelling through.”

“It’s a huge relief for us, even on a weird year with COVID and all the isolation that’s already going on,” said Nathan Friesen, who owns Valley Super Thrifty Pharmacy in town.

“Delivery is huge right now with COVID, and everybody being isolated at home, lots of people are requesting that we deliver their prescriptions as well as other things, and if we can’t get to them by the most direct route, then it just adds time onto the whole trip.”

Friesen said the news of the highway staying open is a major relief for businesses and people in the community.

“In the fall when we had all that rain, it was definitely on our mind, ‘what’s spring going to look like?’, and that’s something that never really leaves the back of our minds,” said Friesen.

“Come March or April we’re always watching the water to see where it’s at and then adjusting accordingly.”

This year — the community of Morris is relieved to receive this bit of good news, amid what has been trying times for the southern Manitoba community.

The Red River is expected to crest in Winnipeg by Wednesday, but is expected to have little to no impact on James Avenue levels, which are projected to peak between 19 and 19.3 feet.