Home  »  News   »   “It was starting to drive away with my father still in it’: carjacking victim speaks out 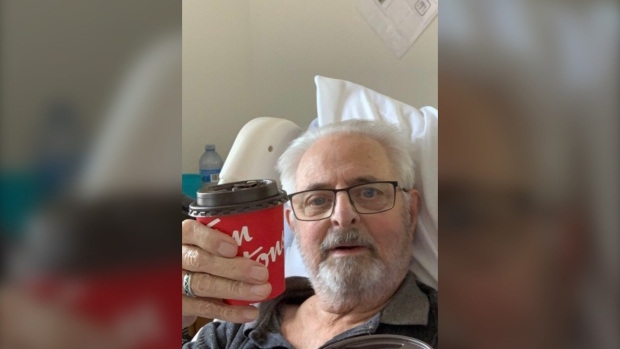 WINNIPEG — A Manitoba man said he was lucky his father wasn’t seriously injured following a carjacking in Winnipeg on Monday.

Speaking to CTV News on Tuesday, Ernest Haak confirmed he was the victim of the incident outside of the Health Sciences Centre.

Ernest was driving his father Hendrik, 88, to a routine appointment at the hospital.

“With the COVID-19 protocol on right now, you can’t just go into the HSC, they have to take care of that for you,” he said. “I park in the loop at 700 William Avenue, where the main entrance is.”

Ernest said he got out of the vehicle to ask staff if they could bring a wheelchair for his father, who has mobility issues and dementia. He said he saw someone leave the hospital with a surgical mask on, and “thought nothing of it.”

“The guards were looking past me at that point, and then one of them said, ‘no, this is not going to happen,’” he said. “I turn in the opposite direction to look behind me. I thought they were looking at something else.

“I was on the passenger side of the vehicle, about 10 feet in front of it, and when I turned to my vehicle, it was starting to drive away with my father still in it.”

Ernest said he was emotional after seeing the car drive away.

“The only emotion you have at that point once the anger and your adrenaline rush from trying to do something about it is gone, you get desperation, despair actually at that point,” he said.

According to police, a general patrol unit located the stolen SUV travelling on Notre Dame Avenue. When the vehicle came to a stop in traffic, the 88-year-old man was able to escape with minor injuries after falling.

Hendrik was transported to hospital in stable condition.

“He hit his head on the concrete and his knee, so they were treating him for a head wound and a knee wound,” Ernest said.

A pursuit started and a second police vehicle was rammed during the incident.

Ernest said he has one lesson from the incident he wants Winnipeggers to learn.

“Under no circumstances do you leave your vehicle running, even if your standing five feet away from it,” he said.

Police continue to investigate the incident and if anyone has information they are asked to call the Winnipeg Police Service at 204-986-6219 or Crime Stoppers at 204-786-8477.

MAN RUN OVER BY OWN CAR DURING CARJACKING; SUSPECT ARRESTED

A 68-year-old man was taken to hospital with serious injuries following a separate carjacking Monday morning.

Officers were called to the area of Bannerman Avenue and Charles Street after reports of an injured man in the back lane.

When police arrived, they found the injured man. Police determined he was run over by his own vehicle after he was carjacked.

Winnipeg police said two suspects, a man and woman, confronted the victim when he was getting into his car. They said he was hit by an object and pulled out of the vehicle. According to police, the suspects took the vehicle and ran over the man in the process.

He was taken to hospital with serious injuries and in unstable condition.

Around 9:30 a.m., officers with the major crimes unit said they saw a female driving the stolen vehicle in the area of McPhillips Street and Mapleglen Drive. Officers tried to stop the vehicle but police said the driver sped away at a high rate of speed and a pursuit ensued.

When police arrived they determined the person in the garbage bin was the same female who was a suspect in the carjacking. Police said she got stuck while trying to hide from police. Officers said she was found with the keys to the vehicle.

A 16-year-old girl from Winnipeg has been charged with:

• Dangerous operation of a conveyance;

• Flight while being pursued by a peace officer; and

• Operating a conveyance while prohibited by an order under the criminal code.

She is currently in custody. The charges against her have not been proven in court. The major crimes unit is investigating.

-With Files from CTV’s Devon McKendrick and Touria Izri