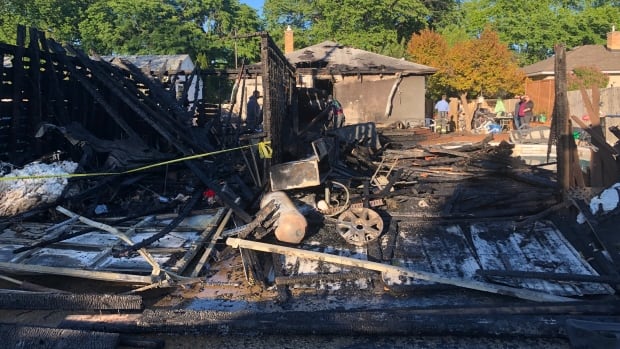 Residents of a Winnipeg neighbourhood were startled by the sight of billowing smoke and loud explosions coming from a nearby house that caught fire late Thursday afternoon, and resulted in a garage burning down.

Carol Shortt, who lives on the corner of Borebank Street and Mathers Avenue in South River Heights, was preparing supper when she happened to notice the smoke while looking out a window.

She asked her husband what was going on, so he went outside to check, she told CBC News.

“We didn’t know if it was the house or the garage, but it was just billowing smoke,” she said.

Shortly after 5 p.m., firefighters responded to a call about a one-storey home that caught fire on Borebank Street.

Crews were met with heavy smoke and flames from the home and got to work to battle the blaze, according to a news release from the City of Winnipeg.

Residents in a South River Heights neighbourhood left their homes to check out another house on fire nearby. 0:25

Shortt, along with many other neighbours, ran up the street and saw smoke go up into the air and heard “three or four pops and bangs” that almost sounded like gunshots coming from the property, she said.

“It was just crazy. I mean, who sees that? Who sees a billowing fire like that in their neighbourhood?” She said.

“It was just so fast and so immense. It’s just shocking.”

The fire was declared under control by 7 p.m., the city said in a news release.

All residents of the home got out safely before firefighters arrived, and two dogs were safely removed from the home and reunited with their owners, the city says.

Two firefighters, however, sustained minor injuries and were assessed by paramedics, but neither needed to be sent to hospital.

The extent of damages wasn’t yet available. The home sustained significant smoke, water, and fire damage, and the garage burned down completely.