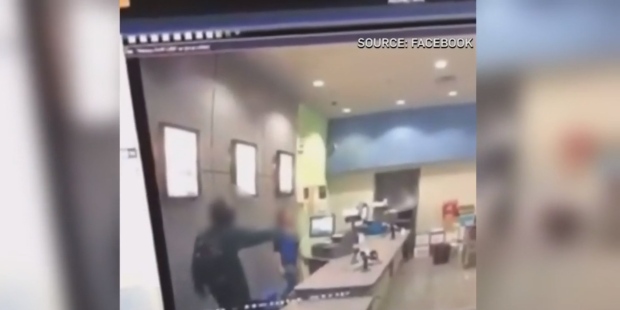 WINNIPEG — The Crown wants a 15-year-old boy to serve the maximum youth sentence for a violent liquor store robbery and ensuing threats and attacks on patrons and employees of a mall in Tyndall Park last November.

Court heard there were a total of 10 victims involved in the incident which started in the Liquor Mart and spilled into the Tyndall Market mall.

“This offence…it shook the city,” Crown attorney David Burland told court at a sentencing hearing for the boy, who can’t be named. “The violence, the harm caused, aggravating factors and the sheer number of impacted individuals are why the Crown is suggesting the youth max going forward.”

Court heard that would mean a sentence of three more years for the boy, who’s been in custody ever since the incident after being denied bail in December. He has no prior criminal record and pleaded guilty to robbery and assault charges in March.

The boy’s lawyer argued that sentence is too harsh and wants the teen to receive credit for the time he’s served in custody.

On Nov.20, 2019, Manitoba Liquor and Lotteries employee, Randi Chase, 26, was punched, knocked unconscious and sent to hospital with a concussion after three people entered the store and started gathering bottles of liquor before heading to the exit.

One of the three people with the boy was wearing a mask and carrying a knife.

Court heard the 15-year-old shoved and punched a different worker before attacking Chase, who shared a victim impact statement saying she’s dealing with the effects of the attack.

“I am constantly afraid in regards to my security,” Chase told the court via teleconference.

Burland walked the court through the details of the incident.

“(He) rounded the checkout counter and quickly approached Chase, who stood there with her arms down by her side – she was standing perfectly still,” Burland explained. “And without provocation (he) wound up and punched Chase once in the face.”

“Chase had no chance to protect herself and was knocked to the ground, unconscious.”

One of Chase’s coworkers ended up in a scuffle with the boy and was also hurt in the incident. Chase was taken to hospital but the violence didn’t end at the liquor store.

Two women walking in the lot were then approached by the teen, who demanded their purses. Another woman exited the mall to try and intervene before a man known to the accused, who happened to be at the mall, tackled him and held the boy for police.

Court heard the boy was heavily intoxicated at the time and admitted his involvement in the incident.

“This, and other offences like it, are why everyone in the city right now who wants to shop at a liquor store has to wait between the doors for their I.D. to be scanned,” Burland told court.

The judge was told the boy had a relatively normal upbringing with his family at their home in a Manitoba First Nation community but ran into some difficulty following a recent move to Winnipeg.

An adult co-accused was sentenced to nine months in the incident. The case involving a second youth is still before the courts.