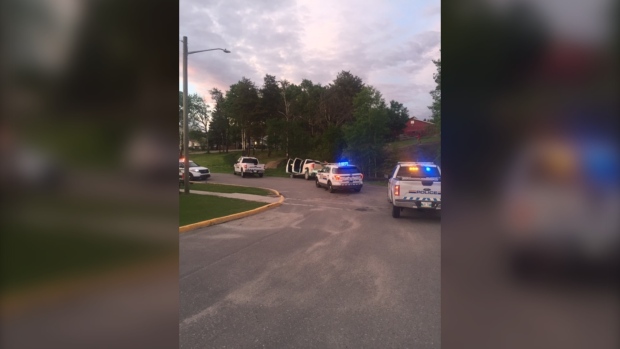 On June 16, Flin Flon RCMP received reports from a 63-year-old man that a 20-year-old man had been kidnapped by two other men while he was at a fishing camp on Kisseynew Lake.

RCMP said two men got out of the vehicle and asked the group if they had any firearms. Investigators said the men from the vehicle assaulted and threatened the 36-year-old man with a knife and then stole a rifle from the group.

RCMP said then the two men grabbed the 20-year-old man and forced him into his own vehicle and told him to drive them to Winnipeg.

Before they left, the men grabbed the group members’ phones, leaving them stranded at the camp.

The 63-year-old man arrived at the camp the next day, and called RCMP after he was told of what happened.

RCMP said officers then issued a notice to surrounding detachments about the vehicle description.

Officers from Cranberry Portage, Flin Flon and Creighton, Sask., patrolled Highway 10 and eventually found the vehicle and tried to pull it over.

However, RCMP said the driver didn’t stop, and officers pursued the vehicle. During the pursuit, officers used a spike belt on two separate occasions. The car was damaged but continued on Highway 10. Eventually, the driver went into a residential area in Flin Flon and came to a stop.

RCMP said when the vehicle stopped, the suspects inside the vehicle tried to run, but were quickly arrested at the scene.

Officers found the 20-year-old man inside the vehicle and said he was unharmed, but shaken up.

Officers searched the vehicle and found a loaded gun and a large knife.

Joseph Gunville, 32, who is from Denare Beach, Sask., is facing 19 charges, including kidnapping with a firearm and robbery with a weapon.

Jeremy Duman, 23, from Flin Flon, is facing 17 charges, including kidnapping with a firearm and robbery with a weapon.

They both remain in custody.

Rozalynn Custer, 28, from Denare Beach, Sask., has been charged with kidnapping with a firearm, theft of a vehicle, possessing a weapon for a dangerous purpose, and unsafe storage of a firearm. She was released on court-imposed conditions and is scheduled to appear in court on July 14.

The charges against all of them have not been proven in court.

“This was an intense and dynamic situation where our police officers risked their own safety by engaging in a pursuit with armed individuals,” said Superintendent Kevin Lewis, District Commander for Manitoba North District, in a news release. “The professionalism and teamwork of our detachment members resulted in the victim being brought to safety and the suspects being taken into custody without anyone being harmed. I am proud of the actions of our members in bringing this event to a successful conclusion.”