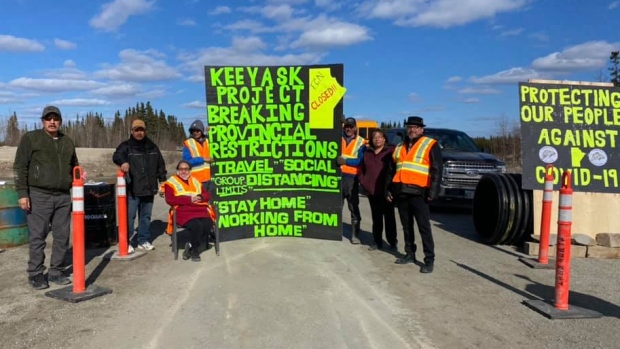 WINNIPEG — The Manitoba Court of Queen’s Bench has issued an injunction against a blockade into a Manitoba Hydro work site in Northern Manitoba.

“This injunction further proves the plan we have to safely resume regular work rotations at Keeyask protects both our workers and neighbouring communities from COVID-19,” said Scott Powell, Manitoba Hydro’s Director of Corporate Communications, in a statement Tuesday morning.

“Our plan goes above and beyond the latest public health guidelines and was endorsed by Dr. Roussin, Manitoba’s Chief Provincial Public Health Officer.”

The blockade has been in place since Sunday. The Tataskweyak Cree Nation, one of the First Nations partnering with Hydro on the project, set up the blockade in an attempt to halt the potential spread of COVID-19 into the community.

The blockade comes ahead of a shift change for the project. Powell said over 500 employees and contractors have been on the site for eight weeks now, and new workers need to be brought in.

Grand Chief Garrison Settee said Sunday he was concerned Manitoba Hydro is bringing in workers from across Canada and the United States to work at the site. Manitoba Hydro said on Sunday the company planned to minimize the amount of out-of-province travellers, and is bringing back returning workers to the project.

Powell said the injunction gives RCMP the power to “remove the blockade immediately.”

The Keeyask Project is located 725 kilometres northeast of Winnipeg on the lower Nelson River. In addition to Manitoba Hydro and the Tataskweyak Cree Nation, the project will also be owned by War Lake First Nation, York Factory First Nation, and Fox Lake Cree Nation.

-With files from CTV’s Mason DePatie