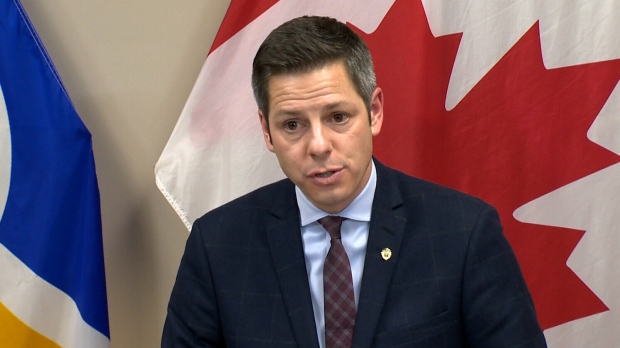 WINNIPEG — Winnipeg Mayor Brian Bowman is speaking out about a recent arbitrator’s decision to side with the Winnipeg Police Union in a grievance against the City of Winnipeg over changes to the pension plan.

“Of course I’m disappointed in the results of the arbitrator’s decision,” said Bowman, during a news conference at city hall Thursday.

“When council decided to move forward with the proposed changes to the Winnipeg Police Service (WPS) pension plan the end goal was to achieve greater sustainability for taxpayers in the face of ever-increasing costs of policing.”

In late March the union won a grievance and an arbitrator awarded more than $600,000 in damages to police officers, saying the city can only make changes through negotiation.

Thursday was the first time Mayor Bowman publicly made comments on the matter. He noted that the city is reviewing the decision and has tried to determine next steps.

“I can confirm today I’m not prepared to support a judicial review,” said Bowman. “As well, I haven’t heard from any member of council that has expressed support for such a review.”

Bowman noted that municipalities across the country continue to deal with increasing costs of policing. According to Bowman, in 2020, police funding took up 27 per cent of the operating budget for a total of $304 million.

“The point of this was always achieving greater sustainability and that’s going to continue to be the goal,” said Bowman.

He said the 2020-2023 multi-year balanced budgets reflect savings of about $37 million over four years from the council-approved police pension plan reforms.

WORKING WITH THE WINNIPEG POLICE SERVICE

Thursday, Mayor Bowman said he had a discussion with Winnipeg police Chief Danny Smyth, earlier in the day.

“I’ve asked Chief Smyth about his ability to sharpen his pencil and absorb these costs and the chief has agreed to do his best,” he said.

“I’ve also attempted to speak directly with the president of the Winnipeg Police Association (WPA) Moe Sabourin by phone. Unfortunately, he’s indicated he’s not available to speak until as early as next week.”

Bowman said the public service will be taking steps to work with WPS and WPA on new options for a multi-year-funding formula for the service, to be considered by council.

Bowan said the goal is to provide planning for the city and a more sustainable and predictable funding level for the service.