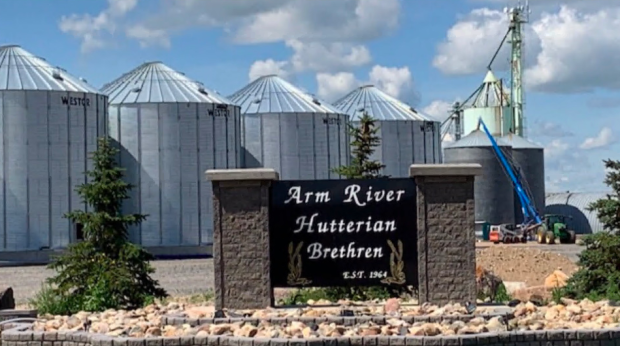 TORONTO — Hutterite colonies across Western Canada have become the epicentre of recent COVID-19 outbreaks, a development that has many members of these communities feeling targeted.

The religious group has long considered themselves to be quite private. Now, as case numbers rise, they have become the focus of press conferences.

Saskatchewan Premier Scott Moe highlighted the community as a concern during a press briefing on Tuesday to announce that they would be “limiting the essential travel to a small number of designated individuals.

“This includes travel between Hutterite communities,” he said.

More than 20 colonies have reported cases of COVID-19 across Saskatchewan and Manitoba.

In a news release on Wednesday, Manitoba health officials confirmed that seven of the day’s eight new cases were on Hutterite colonies.

Authorities have told the public not to discriminate against or stigmatize members of these communities simply because of the new rise in COVID-19 cases.

Still, many in the Hutterite community are running damage control.

Saskatchewan’s Arm River Colony, which operates a large poultry operation, says business is down about 20 per cent, despite the fact that they have zero COVID-19 cases within their community.

“We as Hutterites are not all the same,” George Hofer, poultry manager of the Arm River Farming Company, told CTV News. “We don’t all live in one colony.”

Colony members say they have followed public health rules to stay protected from the virus.

“We shut down our kitchens, we ate at home, family-wise, we didn’t even bend the rules,” Paul Waldner, a minister from the CanAm Hutterite Colony. “You know, I can only speak for myself.”

Waldner sent a letter to Manitoba’s premier and health minister, threatening to file a human rights complaint over officials publicly identifying Hutterites colonies as the location of these outbreaks — an action that has directly led to discrimination against other Hutterite colonies and Hutterites in general, he believes.

“People have become scared of us,” Waldner told CTV News on Thursday.

Of course, Hutterites are not the only group where COVID-19 data is being tracked and then publicly shared. If a COVID-19 case surfaces among groups including First Nations communities, airline passengers or truck drivers, that demographic data has also been shared.

It’s a clash between privacy and public health, one of many to emerge over the course of the pandemic.

Arthur Shafer, an ethicist who teaches philosophy at the University of Manitoba, says that authorities need to be transparent about COVID-19 data.

“Public trust is probably the most precious resource that public health officials have in a time of pandemic,” he told CTV News. “Manitoba public health should have given all the information they did, but they also have to stress that all the public health rules were followed (by the Hutterite community).”

Another point for transparency is that specificity of data can also assist officials and health experts to tailor their response to better serve communities that are experiencing a new surge in COVID-19 cases.

However, after members of Hutterite communities raised their concerns about discrimination, officials announced that a change is coming to Manitoba regarding this public sharing of data.

The province’s Chief Public Health Officer, Dr. Brent Roussin, said on Thursday that going forward, the information released to the public will be less specific, only naming the health region is which a new positive case has been identified.

“I think moving forward, for the most part, we are going to refer to clusters as clusters in the most generic way that we can,” said Roussin. He clarified that if the health of Manitobans appears to be at risk, they will release more specific information to combat that.

He added that making assumptions about specific groups out of fear is “not useful … and it actually hinders Public Health’s ability to control this virus.