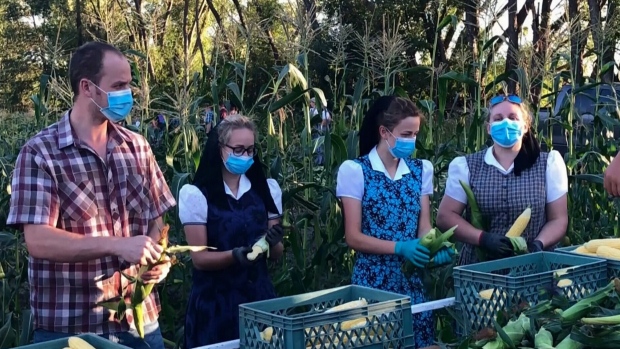 WINNIPEG — With COVID-19 cases on the rise in the province, people living in Manitoba Hutterite communities are ramping up public health measures but as increased testing identifies more positive cases they’re worried stigmatization will continue.

Thirtyone of 49 new cases announced Monday and 47 of 72 cases announced by Manitoba public health Sunday were in communal living communities. They include but aren’t limited to Hutterite colonies.

Kenny Wollmann, a member of the Hutterian Safety Council’s COVID-19 task force, said communities have been taking precautions since early on in the pandemic

“These have now intensified,” he told CTV News on Monday. “I always say that what we did back in March, April, May was a good practice run for what we now have to urgently do.”

Wollmann said it’s all part of precautions put in place to contain the spread of the coronavirus, which has significantly changed the way Hutterites live.

Dr. Brent Roussin, the chief provincial public health officer, said since the start of the pandemic there have been 236 cases in communal living communities. Of those cases, 148 are active, representing a little more than a third of all active cases.

Many of the recent cases were identified during a testing campaign launched by the province – testing which took place through the usual process and right within communal living communities.

“The results over the weekend were actually mobile testing where we actually went to communities to perform testing,” said Roussin. “So we got a high amount of testing done and then a significant amount of cases were identified by that.”

The province came under fire earlier in the pandemic for identifying confirmed cases in people from Hutterite colonies.

There were reports Hutterites experienced stigmatization in surrounding communities, which Wollmann said is once again a concern as cases rise.

“These people are doing everything right and everything by the book but simply because they’re part of a visible minority, they’re being singled out unjustly,” he said.

Wollmann said like all other segments of society, people’s response to the pandemic in Hutterite communities has varied but he said many have taken the virus seriously from day one.

“And if they believed that wearing two masks would help people, they would wear two masks,” said Wollmann. “On the other end of the spectrum, we have people who could be called COVID deniers or people who think it’s a scam or a scheme cooked up by somebody, somewhere to do bad things.”

Hutterite leaders are continually working at bringing people together to do the right thing, he added and encouraged compassion at a time of crisis.

“Hutterites are Canadian citizens and they must also be treated with respect and with dignity,” said Wollmann.

Given the success of the mobile testing, Roussin said he expects plans will be made to do more of it in communal living communities.