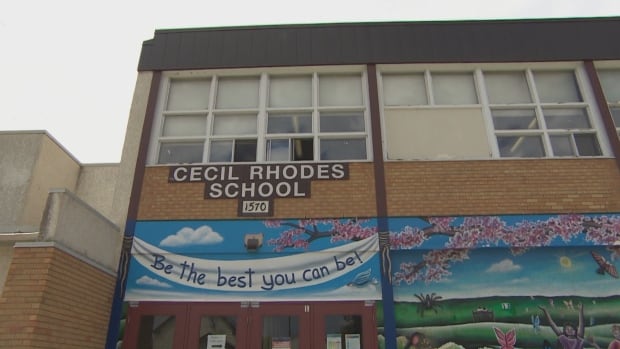 Hundreds of people have signed a petition calling for Winnipeg’s Cecil Rhodes School to be renamed, in light of a global wave of anti-racism rallies and a renewed push to remove colonialist monuments.

Rhodes was a British businessman, imperialist and politician who controlled and exploited southern Africa in the 19th century. His policies paved the way for apartheid.

Jill Sutherland, a Winnipeg teacher who launched the petition on the website change.org this week, said no school should bear the name of such a controversial figure.

“He is a self-proclaimed white supremacist,” said Sutherland.

“I really think that alone should really disqualify him from having this place of honour, especially on an educational institute where the majority of students who go there are Black and Indigenous and people of colour.”

Sutherland, who teaches social studies and holds a degree in history, said she first came across the name of the school while looking for teaching jobs in Winnipeg.

“I did a double take,” she said. “I couldn’t believe this name was still attached not just to a school, but to an elementary school.”

Several years passed but the name stuck with her, she said.

After attending the Justice 4 Black Lives rally in Winnipeg last week and seeing widespread calls around the world to take down colonial monuments, she felt compelled to launch the petition and spark conversation.

Sutherland said students of the school and their families should have input in changing the name.

As of Thursday evening, the online petition had over 400 signatures.

“I would hope that people who went to the school in the past and who might argue against erasing the history would see that this school is there for the children who are there now,” she said. “The school should serve them.”

A spokesperson for the Winnipeg School Division said it is aware of the online petition but declined an interview with CBC News.

But WSD school trustee Jennifer Chen said she supports renaming the school, which is in her ward, and has tabled a motion to discuss the subject with board members on Monday.

“I received numerous emails from community members, including students from the Winnipeg School Division who believe Cecil Rhodes School should be renamed,” she said.

Chen said continuing to honour Rhodes sends the wrong message to the diverse students and families who attend the school.

“It is time for us to take action,” Chen said.

Earlier this week, more than 1,000 demonstrators gathered at Oxford University in the United Kingdom to demand a statue of Cecil Rhodes be removed.

In 2015, a statue of Rhodes was removed from the University of Cape Town in South Africa as a result of the #RhodesMustFall campaign.

Rhodes is still the name behind the Rhodes Scholarship he helped create at Oxford University.

Protesters gathered at Oxford University to demand a statue of imperialist Cecil Rhodes be removed. 1:08

Mandela Kuet, an advocate and member of Winnipeg’s African community, said there needs to be more education around the historical injustices and legacies of people such as Rhodes.

“That’s my concern, is that people are not aware of the injustices that this person has actually put on communities for decades, and forever changed the communities,” he said.

Kuet is planning to speak to the Winnipeg School Division board on Monday with Chen and Sutherland. He wants to see the school’s name changed and a plaque created to explain why.

“My message is more about awareness,” he said. “For them to understand the deep historical context and the ongoing injustice of keeping that name there.”

Kuet said the school’s name isn’t the only problematic one that needs changing, but he said it’s a start.

“There are so many others out there,” he said. “But hopefully this can lead to historical recognition of the wrongdoing that has been done.”

A petition is circulating to rename Cecil Rhodes School, in light of the wave of anti-racism protests around the world and the renewed push to remove monuments symbolic of colonialism. 1:22