Home  »  News   »   How to watch, listen and follow the Conservative leadership results this weekend 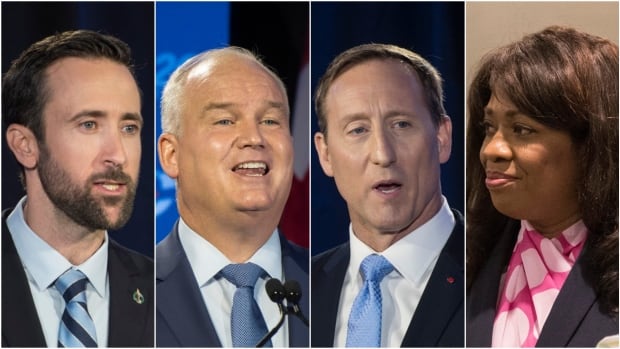 CBC will have full coverage this weekend as the Conservative Party of Canada picks its new leader.

Mail-in ballots are due by Friday at 5 p.m. ET and the results will be announced by the party during an event in Ottawa on Sunday evening beginning at 6 p.m. ET.

Here’s how you can follow CBC’s special coverage as Conservatives pick their next leader:

Listen to The House, with host Chris Hall, on CBC Radio One starting at 9 a.m. ET and on the CBC Listen app. The CBC’s Catherine Cullen and Hannah Thibedeau, who have been following the race from day one, will offer their insights on the candidates with all the backroom chatter leading up to the results.

Stay with CBC News Network and cbcnews.ca throughout the day for the latest news.

Follow: cbcnews.ca for the latest news from Kathleen Harris and JP Tasker as results are announced and for analysis by Éric Grenier and Aaron Wherry afterward.

The National will have a full recap and analysis of the Conservative leadership outcome at 10 p.m. on CBC Television and CBC Gem. On Monday morning, tune it to World Report on CBC Radio One and watch CBC News Networks’ continuing coverage for reaction to the leadership result.