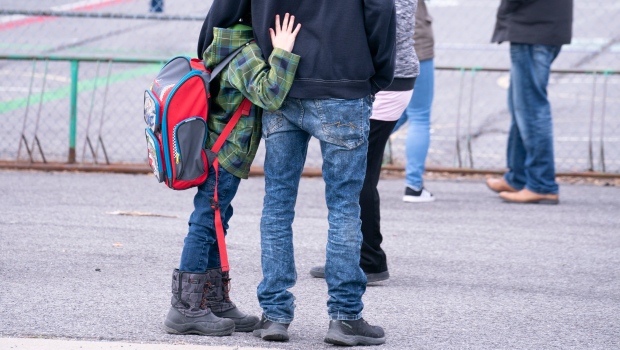 TORONTO — Returning to school can be stressful at the best of times for children, let alone during a pandemic.

There are the new clothes, school supplies, teachers, and the anticipation of seeing classmates for the first time in months, but given the uncertainty of how students are set to return to class, children face a whole host of other potential stressors.

Steven Taylor, a clinical psychologist and professor of psychiatry at the University of British Columbia, and Nicole Haughton, a registered psychologist in the Toronto area, provided insight for parents on how to help their children through this potentially troubling time.

LOOK FOR THE SYMPTOMS

Taylor said first and foremost, parents know their children best and should be able to pinpoint when their child is acting abnormally, but there are some typical symptoms to look out for.

“The very younger ones, when they’re anxious or stressed, they might not have the verbal ability to describe how they’re feeling or their concerns, but they express it through things like tummy aches or headaches or you might see an increase in irritability or tantrums,” Taylor told CTVNews.ca in a phone interview.

Taylor adds younger children may regress to bed wetting as well, though he does anticipate younger children will not be as impacted as older children, partly because they are less likely to understand the situation.

“The more you understand how serious this pandemic is and how can it impact people, the more it’s going to have an impact on you,” he said.

Meanwhile, Taylor said older children are more likely to verbally express how they might be feeling, though they can also appear preoccupied or have a decrease in appetite.

Taylor said if a parent notices something might be off with their child, they should make sure the communication lines are open.

Haughton agreed with Taylor, saying that it’s important to “keep your ears open” to any concerns your child might have when it comes to heading to class.

“A lot of times kids just want to be heard and be comforted,” she told CTV’s Your Morning on Wednesday. “You may not have all the answers at the time, but you can work through it together. As long as you’re there to support them through it, that should be helpful for your children.”

When it comes to talking with children, Haughton said that it’s important parents focus on three key aspects: listening to their concerns, acknowledging their concerns and empathizing with what the child might be going through.

She added that this can also be an anxious time for parents as well and these emotions can rub off on children.

“Be mindful of your own feelings first and foremost, because kids can pick up on that as well,” she said.

MAKE SURE THEY KNOW THESE FEELINGS LIKELY WONT LAST

Taylor said it’s important children understand that the adjustments in day-to-day classroom life that may be making them anxious will become routine in a matter of weeks.

“Many kids are going to be anxious during the first couple of weeks, particularly in the first few days,” he said. “I expect that after that, when kids get into the new routine, things will start to settle down and anxiety levels should drop.”

Taylor suggests driving children directly to school instead of taking the bus during the first few days to help them relax.

“Children who are very anxious about the whole issue of getting back to school, it might help in the first little while to drive them to school,” he said. “You might feel a little nervous in the first couple of weeks, but you’ll notice things will settle down.”

Given that the vast majority of Canadian children haven’t been to school since before the March Break, Haughton said it might be a good idea to visit the school grounds beforehand so the children can familiarize themselves with the facilities, even if you can’t go inside.

Haughton added visiting the school before classes start can be extra helpful for students attending a new school this fall.

“For some kids who are starting a new school, they may be especially very nervous, so have a walk on the new school — on the lands – and shoot hoops, play on the yard and things like that, just so they familiarize themselves with the environment,” she said.

GET THE FLU SHOT

Taylor said to help ease the anxiety of going to class, it’s important to “reduce the burden of stress” on the children, which includes making sure they are protected from other illnesses.

“It’s important for parents to get their children vaccinated, to reduce one other stressor on the kids,” he said.

“I’m hoping that with the added precautions — social distance and hand hygiene, wearing mask and getting a flu shot – we’ll have a mild cold and flu season this year and that will be great, because that would be one silver lining.”