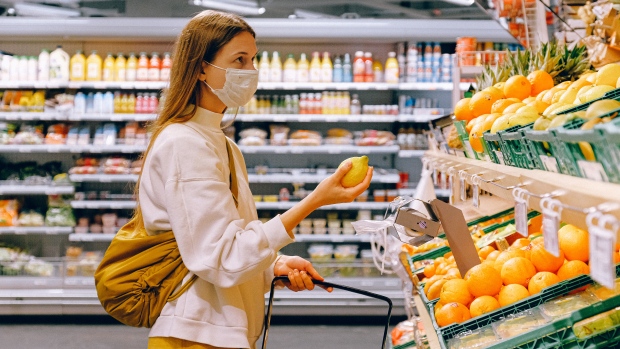 TORONTO — As Canadians hunker down at home to help prevent the spread of COVID-19, some may find themselves spending more time in the kitchen than any other room.

While stockpiling isn’t necessary, the Public Health Agency of Canada (PHAC) says Canadians should have at least 14 days worth of food not only in case they fall ill, but to limit their trips to the grocery store.

But preparing a “pandemic pantry” to last for those two weeks can be a daunting task for novice cooks and those looking to maintain healthy eating habits.

What if you forget to buy an ingredient? Should you stop buying treats? What if people have already bought all foods on your shopping list?

CTVNews.ca spoke with some food experts to get some tips on how to properly prepare a pantry for a pandemic.

PLAN AHEAD AND KEEP STAPLES IN THE PANTRY

Certified culinary nutritionist Trudy Stone says Canadians should plan out what they’ll need at the grocery store before making the trip there.

However, she says it is important to be flexible with your meal plan because grocery stores might not have all the ingredients you need amid the pandemic.

“When building your meal plan, make sure that you have some back up recipes on hand or even for those recipes, have some back up substitutes for some of those more popular ingredients that might not be in stock,” Stone said.

She said be sure to maintain pantry staples such as cooking oils, spices, sauces, stock and similar ingredients.

Toronto-based chef Sydney Mazurek told CTVNews.ca that she doesn’t plan out every meal but keeps staple ingredients in the kitchen to help her create dishes.

“It’s good to have a few basics and staples in your cupboard and freezer that you can build meals from. I keep things around like brown rice, grains, lentils and beans… Then I get an assortment of vegetables from the grocery store that I can prepare with every dish,” Mazurek said via telephone.

Cooking expert and chef Mary Berg stressed that stockpiling is not necessary and said Canadians should only buy what they need.

Berg recommends holding off of produce that may spoil quickly, such as avocados and berries, and instead purchasing produce with longevity that can serve multiple uses including carrots, bananas, squashes, sweet potatoes, kales and cabbage.

FROZEN AND CANNED IS OK

Despite a fear that canned or frozen foods are less healthy, registered nutritionist Lianne Phillipson said taking fresh foods and storing them in these ways can help the produce last longer.

“Don’t bypass all of the fresh foods — you can still get your greens, spinach, salads, bock choy, herbs — and when you get those home, freeze a portion of it so it doesn’t go to waste,” Phillipson said in a telephone interview with CTVNews.ca. “It’s about cycling through a lot of the foods that you have so nothing is wasted.”

“Think of it like going camping,” Phillipson added. “Use all of your fresh first and then you can get into everything you bought as preserves.”

Stone said “virtually any fruit and vegetable” can be frozen except those that are higher in water content, such as celery and cucumber, which may come out soggy after being thawed.

“Properly stored vegetables can last up to a year when placed in the freezer,” Stone said. She added that there are certain steps that can be taken to ensure produce lasts its longest.

“When you get home from the store, you want to take any leafy greens or herbs out of the bag and rinse them really well. After that, you will want to dry them with a cloth and then you can just wrap them in some paper towel and place them in the fridge,” Stone said. She said this doubles the shelf life of produce by reducing the amount of moisture absorbed.

Stone said buying canned goods like tomatoes, beans, chickpeas, pumpkin and fish are also an option if fresh foods are spoiling too quickly.

“There’s nothing wrong with canned foods, it’s just about what we do with those canned food,” Stone said. “A lot of people right now are buying canned beans, so when we open a can of beans we want to make sure we are rinsing them really well to remove the sodium and make sure they’re healthier.”

Phillipson said pantry items should be kept out of direct sunlight and at room temperature to ensure they don’t spoil. She also recommends keeping garlic and onion on hand to add flavour to any frozen or canned foods.

With spending more time at home, trips to the kitchen may be happening more frequently than they used to be. But food experts say this does not mean a healthy diet can’t be maintained.

Stone says Canadians shouldn’t be worried about overeating if there are healthy snacks in the cupboard.

“We should really be trying to minimize processed foods as much as possible and packaged foods. I don’t want to say completely eliminate them, because that is really hard to do, but certainly we want to start crowding out some of those convenience foods like cookies and baked goods, and replacing them with healthier items,” Stone said.

For healthier options, Stone suggests pairing dark chocolate with healthier fats like almonds instead of reaching for a candy bar. She also recommends snacking on sliced apples with nut butter, vegetables dipped in hummus and trying out dried fruits that are high in iron, fibre and antioxidants.

Mazurek says it is more about what Canadians are eating, rather than how much.

“I wouldn’t stress out so much about the quantity that you’re eating, so much as eating something that is nutritionally sound because it will satisfy you a lot more than say chips,” Mazurek said. “The most convenient options are nutritionally kind of empty.”

Phillipson suggests staying away from sugary, refined foods such as cereals that have no nutritional value.

“Just by pass them. They’re really not doing anyone any good from a nutrient standpoint or supporting your immune system,” Phillipson said. “Try and stick to foods that are as real as possible.”

But she cautioned that people don’t have to stay away from frozen, pre-packaged foods. Phillipson suggests adding fresh vegetables on top of a frozen pizza or treating a frozen pasta dish like a “once-a-week takeout meal” to balance one’s diet.

LIMIT THE TREATS BUT KEEP BAKING

While Canadians may be using their free time to bake sour bread loafs and banana breads, Centennial College culinary professor Matthew Duffy says that doesn’t mean they have to eat everything they make.

In a telephone interview with CTVNews.ca, Duffy said people can reach out to neighbours and friends to do a “zero contact baking exchange” to reduce the amount of sweets in the house while continuing to bake.

“It helps people share a moment and it helps you connect with someone even if you’re not with them in person, but then it is also a good way to minimize any leftover [baking] around the house,” he said.

Berg suggests breaking down recipes into smaller portion sizes to limit sweets around the house.

“Any recipe that contains egg can be split basically down to where the recipe requires one egg,” Berg said. “If a cake recipe needs three eggs, you can split that into thirds and just make a third of the recipe, it just takes a little bit of math.”

If grocery stores are low on flour, Berg said Canadians can try baking with healthy alternatives such as rice flour, coconut flour or quinoa flour. She added that some bakeries are now selling yeast and other baking staples to promote shopping local.

For those who are beginners in the kitchen, Duffy recommends novice cooks keep their recipes simple.

“There’s a lot of desire to start into something advanced, but if you start with simpler cooking styles you can then expand on it,” he said. “Maybe don’t try to create that restaurant meal but do try roasting a chicken.”

Duffy said a roasted chicken is a “great option” for beginners because it is a food that is available year round, can be served with various side dishes and usually creates leftovers.

“So many of the chefs that I run and operate with have taken to Instagram and YouTube to show really simple ways to fry an egg and cut vegetables or even make a salad,” Mazurek said. “There’s a lot of simple tutorials [online] right now.”

She said cooking doesn’t have to be a chore as “it can take as much time as you want it to.”

“A lot of us are looking for something to do right now and cooking is a great opportunity to build on a life skill,” Mazurek said.

While takeout may be a tempting option, Berg says cooking at home can be more economical during a time that may be financially uncertain for some.

“If you have any food in your pantry, begin by looking there and then start experimenting,” she said. “It’s an easy way to throw things together and it will cost less.”

Berg said the details are in the finishing touches of a dish. She says adding a splash of balsamic vinegar to a pasta sauce, squeezing fresh lemon on fish or adding a dash of kosher salt can bring out the flavour of a meal.

PLAN TO COOK AND TREAT IT AS ‘FAMILY TIME’

Phillipson says cooking can be a way to fill the extra time families may now have and can be used as an educational tool for kids.

“Because we have so much time now, cooking at home can involve the whole family. While everybody’s isolating and not really sure what to do, it is a great time to get your kids into the kitchen,” Phillipson said.

She suggests having young children help measure ingredients or cut soft vegetables with a butter knife so everyone is involved with preparing the meal.

Amid the pandemic, Duffy said cooking can bring a family together during an otherwise difficult time.

“A lot of people feel like they have crossed the daily finish line when they sit down on the couch. But I think meal time is something we can celebrate instead,” Duffy said. “You can even Skype in your friend or neighbour as a way to share food.”

Berg echoed the same sentiment, adding that cooking can “act as an escape” for those who are stressed about the pandemic.

“I think people are having a hard time trying to find something to do to occupy their time and their brains, because it is hard not to spiral and get nervous right now — but cooking can do that,” Berg said. “Make [food that] is comfortable to you and makes you feel good both physically and in your soul.”