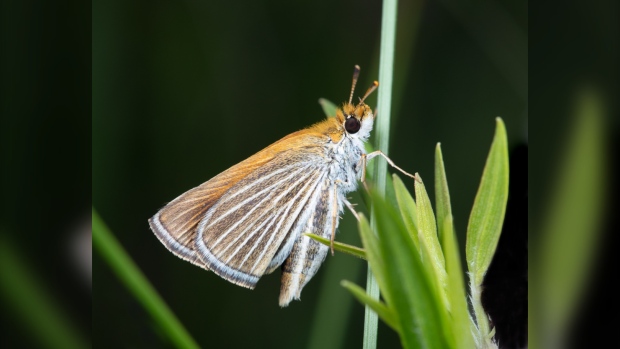 WINNIPEG — The Assiniboine Park Conservancy is taking steps towards saving an endangered butterfly species from extinction.

On Monday, it announced the release of 19 Poweshiek skipperling butterflies at the Nature Conservancy of Canada’s Tall Grass Prairie Preserve in the R.M. of Stuartburn, Man.

This comes after the team bred and raised the butterflies at the Assiniboine Park Zoo.

Currently, the Poweshiek skipperling, a small grassland butterfly, can only be found in two locations: Manitoba’s Tall Grass Prairie Preserve and another site near Flint, Mich.

According to the Assiniboine Park Conservancy, experts say there could be fewer than 500 butterflies from this species left in the world.

The conservancy noted butterflies are especially sensitive to changes in their environments, so the loss of much of the tall grass prairie has resulted in the decline of the Poweshiek skipperling butterfly.

“Breeding and raising these butterflies from egg to adulthood in a controlled setting at the Zoo presents us with a tremendous opportunity to increase the number we release each year and potentially introduce them to new sites within the available grassland habitat here in Manitoba,” Burns said.

The conservancy is also working to sequence and analyze the genome of the Poweshiek skipperling butterfly to fully understand the decline of the species.

“Biodiversity of plant and animal life is incredibly important and the loss of one species can have a ripple effect that spells disaster within a specialized ecosystem,” Burns said.

“The knowledge we are gaining by studying the Poweshiek skipperling could prove to be invaluable for other grassland species.”

This conservation project is a collaboration between the Assiniboine Park Conservancy, the Nature Conservancy of Canada, the Minnesota Zoo, the U.S. Fish and Wildlife Service, and the University of Winnipeg.