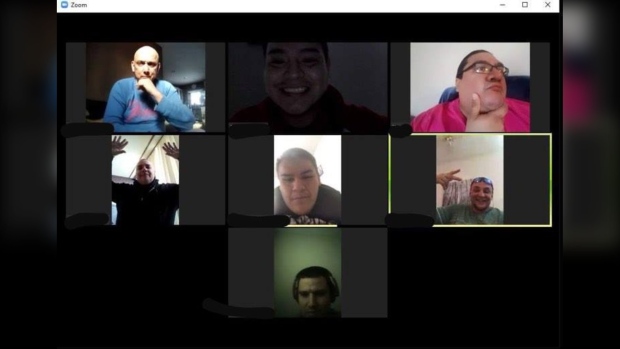 WINNIPEG — While COVID-19 has kept the global population at home and in isolation, one men’s support group in Winnipeg is using technology to ensure their members are not left behind.

“I can burn sage on the screen and that enlightenment is for someone across, and even though we aren’t physically getting that sage, we are involved in ceremony,” said Ryan Beardy, founder of Healing Together Men’s Wellness Organization. “I can pray for them and we call, l listen through this camera and that’s really cool.”

He said they are actively using social media to invite others to join and get the supports they may need especially during isolation.

“It’s been huge for the men, they absolutely enjoy it and they have been asking for more circles, more time, ‘can we do this more often?’ When it is their time to speak they are very candid, very open and honest because we already built that circle, trust, that comradery,” said Beardy.

He added they are fortunate to live in a time and place where video conferencing is available to aid in their ongoing process of self-healing.

“If we weren’t able to video conference I don’t think it would have been effective so we’re appreciative to use these platforms and the men gravitate towards them and its huge.”

The men’s group has been meeting at Thunder Bird House on a weekly basis since the fall of 2019. Bready told CTV News right now they have grown to nearly 50 active members in their group chat.

“So our first meeting after we shut down there was a lot of sad men that need that space to vent,” said Beardy.

They provide a safe space for men to talk through their thoughts and emotions. Beardy said they support each other through the ups and downs of life and help to find more positive ways to deal with conflict and change toxic masculinity traits.

Beardy said with group members quarantined there’s’ been more of a cognitive shift for each member about how they can take care of their family and their loved ones. He said the base level teachings the group has encouraged each other to learn of love, respect and reciprocal relationships have really come into play for members.

“In this group, we all sign a contract, the contract is sort of like your code of honor and it has in there love and respect and the seven teachings, and in the province not only are we using the seven teachings in that circle when we share amongst the men, but we’re asked to bring that circle of teachings outside. So that’s where we play into the home, play into the community, because you are always mindful of these teachings, ” said Beardy.

He said the contract also helps remind group members they have made a promise not only to their family and community but most importantly to themselves.

“The men create a safety net for the other men,“ said Beardy.