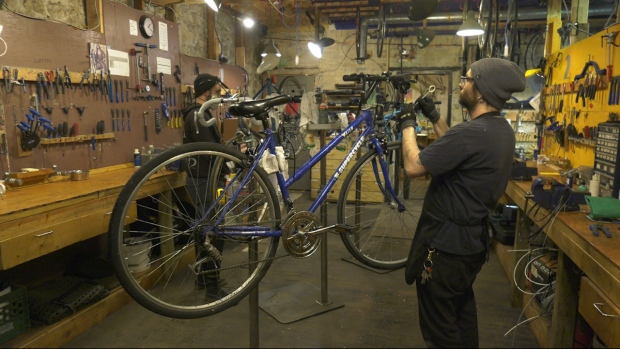 WINNIPEG — Rising temperatures and restrictions to contain COVID-19 mean some people are turning to two wheels to get fresh air and exercise, prompting bike shops to find ways to keep customers moving during the pandemic.

Manitoba public health orders allow people to cycle and permit bike shops to stay open, but they’ve had to make some changes in how they do business.

“We sat down and had a long discussion on it and decided the way it was going to work was that we actually had to close the showroom,” said Tim Woodcock, owner of Woodcock Cycle. “We felt that was the safest thing for our customers as well as our staff.”

Woodcock said he and his employees made that choice even though the store’s technically allowed to keep its doors open, provided it puts measures in place to ensure customers stay at least two metres away from others.

The doors may be closed to customers, but inside staff are still hard at work – fixing, disinfecting and preparing bikes and bike parts ordered online for home delivery or pickup outside the store.

Woodcock said the store’s also doing pickups and dropoffs for people who want their bikes serviced, which is now only possible with an appointment. With fewer people working – to help maintain physical distancing and to accommodate staff members who choose to stay home – he said meeting demand for repairs during the busy spring season has been challenging at times.

A NEW KIND OF CUSTOMER

Over at Natural Cycle the approach and the experience has been similar. Co-owner Zach Allard said fewer seasonal workers have been hired during the pandemic to allow staff to keep their distance from each other.

“We typically have less mechanics on than we’ve had in the past,” he said, noting that has an impact on how many total repair jobs they’re able to get done.

He said because the shop mainly does repairs and custom builds, it’s opted to keep its doors open to customers, but limits the number of people allowed inside at one time to three.

“Our shop has always had a pretty small but consistent volume of people coming in and out of the door,” said Allard. “So we’ve been able to operate relatively unencumbered, but that being said, we don’t know what to expect – we’re not able to do long-term planning or budgeting.”

Allard said so far during the pandemic he’s noticed some people are coming in just to keep the bikes they have in working order, but others are still ordering new bikes.

“We also have a set of new customers or a new demographic that is either first-time cyclists or getting back in to the sport. So that being said, we have a lot of people buying full bikes,” he said. “Sales are relatively the same, but we’re having a lot of different types of sales, so a type of income that we would normally rely on is no longer there but it’s supplemented by another type of customer. We’re really unsure if that’s a sustainable pattern. We’ve never seen this before.”

Cycling Canada, a national organization which promotes the activity for both recreation and sport, advises against large group rides at this time and recommends on its website people ride indoors using training equipment, if possible. If you do go outside for a bike ride, the organization said it’s important to follow public health guidelines and practice physical distancing by keeping two metres away from others and avoiding crowded areas.