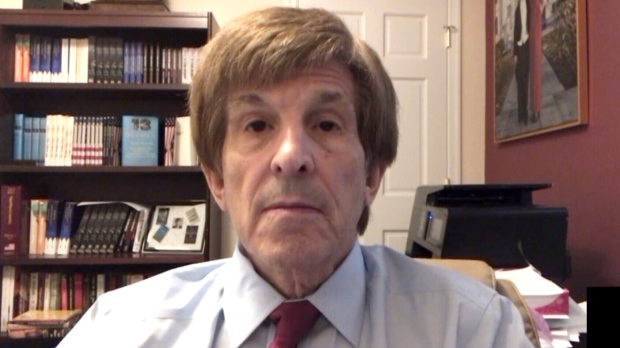 TORONTO — A leading American historian best known for successfully predicting every U.S. election for more than three decades says newly published revelations that U.S. President Donald Trump knew COVID-19 was deadly in the early days of the pandemic but publicly downplayed the virus will go down in history as “damning.”

“This is the greatest dereliction of duty in the history of the U.S. presidency,” Allan Lichtman, a professor of history at American University for nearly 50 years, told CTV News Channel on Thursday.

Veteran journalist Bob Woodward, whose reporting on Watergate ended Richard Nixon’s presidency, revealed that his upcoming book “Rage” includes an interview with Trump in which the president is quoted saying the coronavirus was highly contagious, airborne and “deadly stuff,” despite publicly dismissing it at the time as no worse than the flu.

Trump made the comments in a February interview with Woodward, weeks before the World Health Organization declared a pandemic. As the death toll climbed, Trump publicly suggested the virus was “going to disappear” and occasionally mused that car crashes were deadlier, but the U.S. hadn’t banned driving.

“I wanted to always play it down,” Trump told Woodward in a subsequent interview in March. “I still like playing it down, because I don’t want to create a panic.”

Woodward spoke with Trump 18 times for the book. On at least one occasion, Woodward said Trump was the one who picked up the phone and called him to “unburden himself” about the virus.

Why Trump felt comfortable speaking so candidly with Woodward, one of the most influential journalists in American politics, has everything to do with his “pathological ego” Lichtman said.

As for Trump’s defence that he didn’t share how deadly the virus was because he didn’t want people to panic, Lichtman said it simply doesn’t pass the sniff test.

“What is Trump’s whole campaign based on? Causing panic. ‘Elect Joe Biden and your streets are going to burn. The criminals will be attacking your houses. The suburbs will be abolished.’ This is a guy who’s worried about causing panic? Come on. How could you possibly believe that?”

Questions have been raised about why Woodward chose not to reveal details of the interviews until September, less than two months before the Nov. 3 election. Woodward has defended the decision, saying he needed time to make sure that Trump’s comments were accurate.

It wasn’t until May that Woodward said he believed Trump’s comments were based on accurate information.

“If I had done the story at that time about what he knew in February, that’s not telling us anything we didn’t know,” Woodward told the Associated Press on Thursday.

Trump joined the online pile-on of Woodward, questioning why he sat on the information for months.

“If he thought they were so bad or dangerous, why didn’t he immediately report them in an effort to save lives? Didn’t he have an obligation to do so? No, because he knew they were good and proper answers. Calm, no panic!” Trump tweeted.

Lichtman said he also has lingering questions about the timing of the book. He compared the situation to when Trump’s former national security adviser John Bolton declined to discuss Trump’s actions towards Ukraine during impeachment hearings, but in June published new details in his memoir “The Room Where It Happened.”

“I understand he felt he needed to totally verify and put it into context, but this reminds me a bit of John Bolton who had vitally important information and held it until he published his book. I do think there are some ethical conundrums to be confronted there,” he said.

Others have raised similar concerns, such as Esquire’s Charles P. Pierce.

“Nearly 200,000 Americans have died because neither Donald Trump nor Bob Woodward wanted to risk anything substantial to keep the country informed,” Pierce said.

Lichtman is best known for his book “The Keys to the White House,” which lays out a series of 13 true or false questions that have helped him predict the winner of every U.S. election since Ronald Reagan’s win in 1984. He successfully predicted that Trump would win in 2016, but this year he anticipates Biden will take the White House.