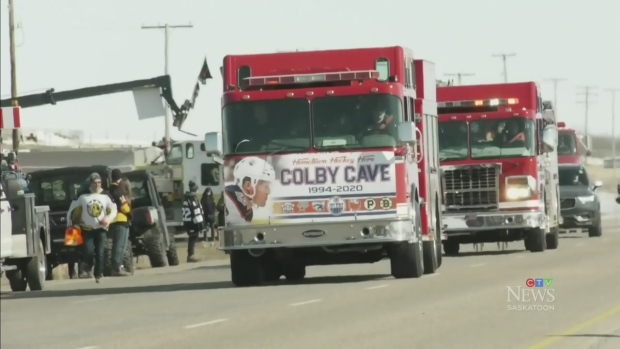 The memorial, organized by community members had vehicles lining Highway 16 to show support for Cave’s family who are expected to return home from Ontario, where Cave was receiving care.

People taking part were asked to wear hockey jerseys and make signs of support to display on their vehicles while practicing physical distancing.

Bob Bartkewich, a longtime friend of the Cave family says he was one of the first people to hold Colby after he was born. He said receiving the news that Cave died was incredibly hard for him.

“You know Colby was like a son to all of us, and to get that phone call was just devastating.” Bartkewich said.

Bartkewich was one of the organizers of the event. What started out as an idea to get Colby’s dad’s hockey team to line the highway quickly changed a larger show of support that still allowed for physical distancing.

Dane Shury remembers playing hockey as a kid with Cave, thinking back to how good he was on the ice and how kind he was off the ice.

“He’s a hometown hero. It’s been a shock to the community, it really has been” Shury said as dozens of cars lined up behind him on the highway.

“It has all of us tugging at our heart strings. It’s very impressive, the turn out and everything.” Shury said.

Cave was placed in a medically-induced coma last Tuesday at Sunnybrook Hospital in Toronto.

He had been airlifted to that facility after being admitted to a hospital in Barrie, Ont., the day before

He underwent emergency surgery on Tuesday with doctors removing a colloid cyst that was causing pressure on his brain.

Cave’s agent, Jason Davidson, said Tuesday that the situation didn’t appear to be linked to the COVID-19 pandemic.

Emily Cave posted a photo of herself clutching her husband to Instagram, saying goodbye to him in an emotional caption.

To my best friend & love of my life, Colby My heart is shattered. The amount of physical, mental, and emotional pain I am in when I think about never seeing, touching, or holding you again is unbearable. You are and will always be my person, my hero, the greatest thing to happen to me. I never dreamed of being a widow before our first wedding anniversary. Although, every cell in my body is lost without you, I promise to continue to make you proud. You were the best friend, husband, doggy daddy, and oh how I wished to see you as a baby daddy. I’ll see you again soon, Colb. You’ll be in heaven meeting me with a warm wet kiss. You’ll be with me every step of the way. I don’t want to stop writing just like I didn’t want to stop holding you this morning at the hospital. You are my everything. You always will be. Thank you for now being the best Guardian Angel. Just as you ended your vows, I am going to end with one word, AGAPE. ✨

“My heart is shattered. The amount of physical, mental, and emotional pain I am in when I think about never seeing, touching, or holding you again is unbearable,” said one section of the post. “You are and will always be my person, my hero, the greatest thing to happen to me.

-With files from the Candian Press