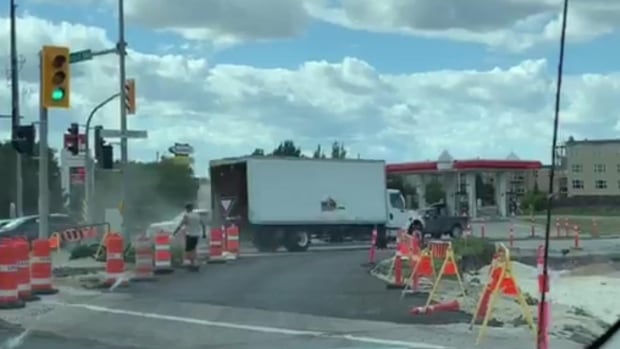 A Winnipeg driver says police were involved in a high-speed chase with a person in a cargo truck in the Southdale neighbourhood on Sunday evening.

Tong Phrakonekham witnessed the pursuit and says he saw a damaged box truck with its overhead door open heading north on Lagimodiere Boulevard at Fermor Avenue at about 5 p.m.

“I’m surprised that box truck got around all the cars,” he said, noting the vehicle drove through construction barricades at approximately 90 kilometres per hour.

“I don’t know how often police chases happen in Winnipeg but it’s definitely something I’m not used to seeing.”

Winnipeg police say the suspect abandoned the vehicle and ran away.

The K-9 unit is out looking for the person in the Transcona area, an officer told CBC News.

Police wouldn’t say if the truck was stolen or if anyone was hurt.