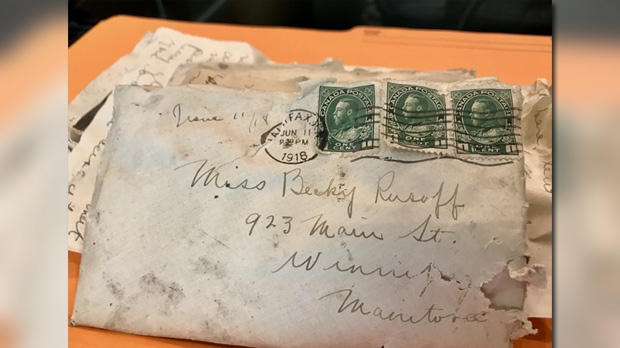 Construction crews working on a downtown Winnipeg building have made a fascinating discovery.

Tucked underneath the demolished wreckage of a staircase, was a series of love letters more than a hundred years old.

Site supervisor Chirag Patel believes “someone buried them under the staircase.”

The construction crew put the letters on a table, and kept working.  Then on a break, they started to read through them.

Addressed to a woman named Becky, the words are still plainly visible.  “It’s a funny thing this love business,” writes the author, “it has wrecked this calm exterior I have built around me.  It’s even painful.  I understand the bride’s tears at a wedding.”

Based on the letters, the writer was in Halifax at the time, and the woman named Becky was here in Winnipeg.

There are two separate addresses, one on Main Street and the other on Burrows.

The buildings management company says it would like to give the letters to any surviving relatives.

“I think it would be nice if we could find the rightful owners, and pass it on so everyone can kind of just go down memory lane.”