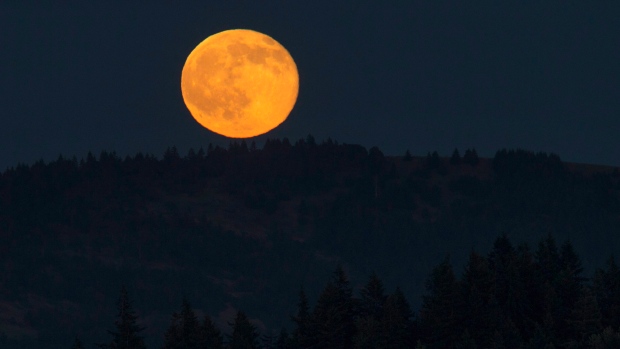 TORONTO — A Strawberry Moon will rise on Friday and will pass through part of the shadow of the Earth in what is called a partial penumbral eclipse of the moon.

But don’t expect a red-hued moon resembling a “blood moon,” which occurs when there is a total lunar eclipse.

Rather, the Strawberry Moon gets its name for the time of year the full moon appears, according to NASA.

The space agency said the Algonquin tribes named the Strawberry Moon as such because it occurs during the relatively short season for harvesting strawberries in the north-eastern United States.

In Europe, NASA said the full moon has been called the Mead Moon or the Honey Moon after the fermented drink.

In appearance, the Old Farmer’s Almanac said the Strawberry Moon will appear large and golden-hued when it rises above the horizon. NASA said the moon will appear full for about three days, from early Thursday morning into early Sunday morning.

While the full moon will be a sight in and of itself, celestial watchers will be treated to an accompanying partial eclipse of the moon on Friday, depending on where they live.

Unfortunately for those in North America, the penumbral lunar eclipse won’t be visible because the moon becomes full during daylight hours when it’s below the horizon.

For observers in Europe, Asia, Africa and Australia, however, the moon will appear ever-so-slightly darker than normal as it passes through the outer edge of Earth’s shadow (the penumbra). The dimming effect won’t be as a dramatic as a total eclipse and will be difficult to detect for the casual watcher staring up at the sky.

The partial penumbral eclipse of the moon will occur on Friday afternoon at 3:12 p.m. Eastern.

Although moon-gazers in North America won’t be able to witness the partial eclipse in person, they can still livestream the lunar event thanks to the Virtual Telescope Project, which will stream the view above Rome’s skyline in Italy beginning at 3 p.m. Eastern.