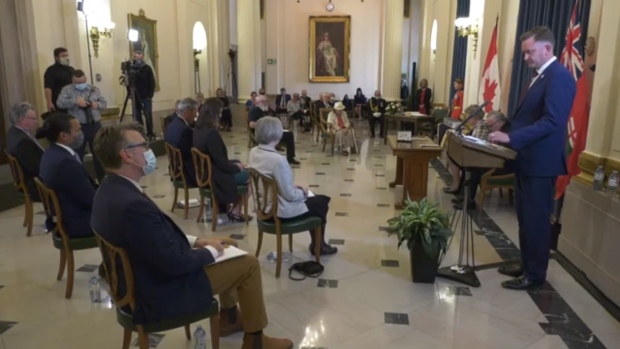 WINNIPEG — A dozen Manitobans were honoured for their lifetime achievements Thursday afternoon.

The Order of Manitoba ceremony took place at the Manitoba Legislature, with 12 Manitobans receiving the honour.

The ceremony usually has upwards of 200 guests, but due to the COVID-19 pandemic, only those invested and their guests were on hand.

The new members come from a variety of backgrounds, including the arts, community activism, education, and health.

The full list of Manitobans being invested in the Order of Manitoba are:

“For all the enormous value of the contributions they’ve made in their own fields of endeavour, the inspiration that you provide to others is perhaps the thing that stands out the most this year,” Filmon said.

The Order of Manitoba was created in 1999 to recognize Manitobans who have enriched the social, cultural, or economic well-being of the province.