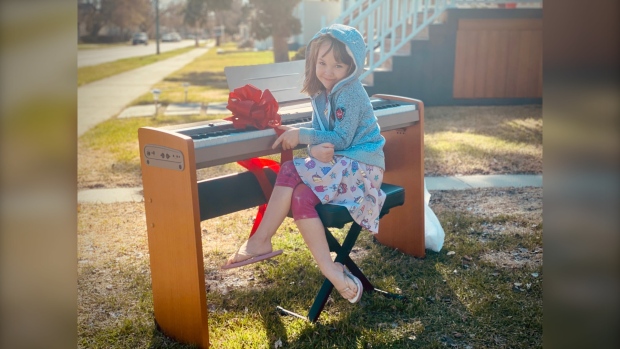 WINNIPEG — One six year-old Winnipegger got a musical gift of a lifetime Wednesday morning.

A piano teacher in the Elmwood area used money from his own savings and teamed up with the parents of a student for a surprise.

“He phoned and said ‘oh I’m outside,” said Fayth Thomas-Passey. “My daughter Chelsea saw him from the window and ran outside and saw the piano and got all excited. It even had a bow on it.”

“Her eyes just lit up, it was just so exciting,” said Corey Francis, owner of Piano Expressions with Corey.

Since the COVID-19 closed non-essential businesses, Francis, a piano teacher, has continued to teach free lessons to his students through online platforms.

Chelsea has struggled in lessons recently, as her keyboard at home was broken.

“We were using an old keyboard from my father in-law, but actually half of the keys don’t work and every once in a while, it will start beeping at you while you’re playing piano,” said Thomas-Passey.

Francis said he and Chelsea would make the best of it and she never once complained.

“She just plays the keys that are working on that given week, and we laugh together when it makes weird noises, or stops working mid-performance,” said Francis.

Chelsea’s parents had planned on buying her a keyboard before the pandemic hit and caused the family to fall into financial uncertainty.

“I’m just returning from (maternity) leave, it wasn’t in the cards to dish out a few hundred dollars to get a new piano,” said Thomas-Passey.

Francis told CTV Chelsea has a positive and kind spirit that inspired him to go above and beyond to encourage her musical passion.

Francis found a digital piano Tuesday night and brought it to her family Wednesday morning. It has 88 full-sized and weighted keys, a music stand, a bench, and a pedal.

“It was so overwhelming,” said Thomas-Passey. “Honestly I was just in tears at work.

“It’s just one of the sweetest things anyone has done for our family. And to know that people so supportive and caring during hard times like this. I mean, it’s money out of his pocket that he using for us, and I couldn’t be more appreciative.”