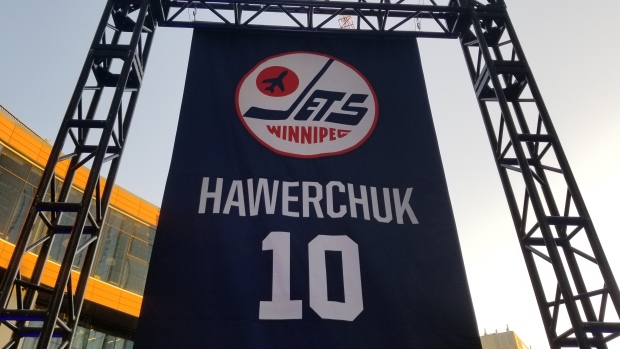 WINNIPEG — The hockey world continues to mourn the death of Winnipeg Jets legend Dale Hawerchuk. While many people are remembering him for the hockey play that he was, he is also being remembered for the man he was while in Winnipeg.

Many in Winnipeg have been making their way to True North Square, where Hawerchuk’s banner is temporarily raised for fans to pay their respects.

“He’ll always be talked about, he’ll never be forgotten. He was a great player, a great person,” said one Winnipegger visiting True North Square, wearing a Hawerchuk Jets’ jersey. “He went out of his way to help people. The old cliché he’d take the shirt off his back to help you out – well this is the way Dale was.”

After learning of Hawerchuk’s death, the Jets took his number 10 banner from the rafters of Bell MTS Place, and brought it to True North Square for fans to honour their hero.

With highlights looped on the overhead screen, many here are remembering the Ontario-born player as a Jet, and also as a Winnipegger.

“I know I’ve heard him say it many times, that was his home,” said former Winnipeg Jet Kris King, now the vice president of hockey operations with the NHL.

King never played with Hawerchuk in Winnipeg, though he played with other great Jets like Teemu Selanne and Keith Tkachuk. He said none of those stars of the time were held in the same regard as number 10.

“Those were people you’d think the fans would be relating to, but there were more Hawerchuk jerseys in the crowd than there was others,” he said.

King said he later became friends with Hawerchuk, bonding in the shared experience of being a Jets captain – a role King said was established by how Hawerchuk led the team on and off the ice.

“I looked at who wore it before me and when you can say you wore the ‘C’ the same as a Dale Hawerchuk was probably one of the more meaningful parts of being a Jets captain,” King said, adding Hawerchuk’s leadership was felt well beyond the rink.

Remaining true to Winnipeg, he embraced the team’s return to the city, showing a loyalty many of his closest friends experienced right to the very end of his life.

“I told him I was very proud of being a Winnipegger and thanked him for including me in all the events that brought me back and that I was thinking of him and praying for him,” King said. “He just said, ‘Thanks buddy,’ and that was the night before.”

Other prominent figures in Manitoba acknowledged Hawerchuk’s legacy, including Premier Brian Pallister, who got emotional during a news conference on Wednesday.

Hawerchuk’s banner will remain at True North Square for the time being, and the team said it will also be putting up a statue of Hawerchuk outside the Bell MTS Place.