Home  »  News   »   Heavy, wet snow and rain could dump down on Manitoba for days, meteorologists say 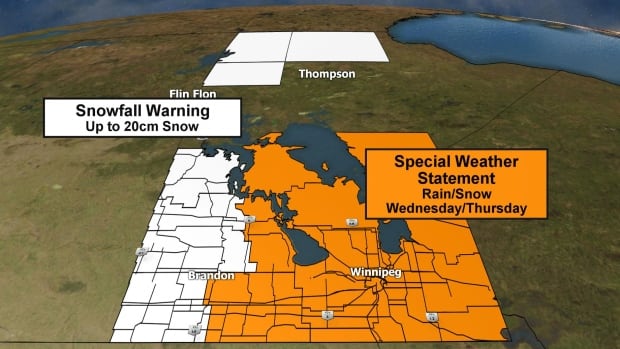 Snowy wet weather could dump on much of Manitoba, possibly starting as soon as Tuesday night and lasting through Friday.

In an online public alert on Tuesday, Environment Canada issued a snowfall warning for the southwest, with 10 to 20 centimetres or more of “heavy, wet snow” on the way, starting early Wednesday.

A low pressure system is getting stronger as it tracks northward from the Canada-U.S. border up to Duck Mountain. Precipitation is expected to start falling early Wednesday morning in the south as it works its way north.

CBC meteorologist John Sauder said it could impact local weather over three days, starting with rain, at times heavy, in the west that changes into snow throughout the day on Wednesday in the areas of Melita up to Swan River.

It will be Wednesday evening before the rain hits the Red River Valley, which he predicts could change into a mix of rain and snow, or just wet snow, on Thursday.

Sauder said it is tough to estimate how much will accumulate, although he expects the southeast portion of the province will get more wet snow on Friday.

“This is a significant weather disturbance that has a lot of moisture with it,” he said in an email.

A special weather statement is in effect for the rest of the southern region, including Winnipeg and extending north to the areas of Poplar River and Grand Rapids, from the border at Saskatchewan to Ontario.

A snowfall warning is also in effect starting Tuesday night though Wednesday for Brochet, Tadoule Lake, Leaf Rapids, Lynn Lake and Pukatawagan, as prolonged snowfall continues to hit northern communities. The system could drop an additional 10 to 15 centimetres of snow to the region, bringing the total amount up to 25 centimetres.

Visibility may be “suddenly reduced” at times while travelling through heavy snow, Environment Canada warns. Travellers should consider packing an emergency kit with drinking water, food, medicine, a first-aid kit and a flashlight.